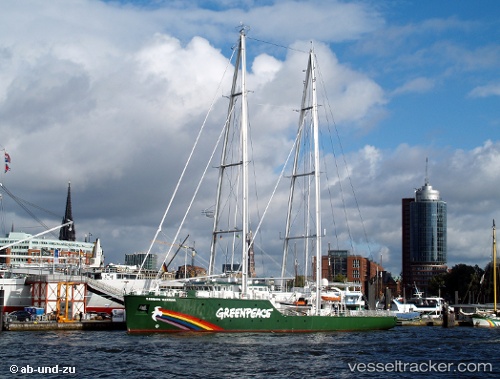 Polish authorities stormed the "Rainbow Warrior" on Sep 9, 2019, as Greenpeace conducted a protest action against Polish coal imports. The activists tried to prevent a bulk carrier loaded with coal from docking in Gdansk, which ended up with heavily armed border guards boarding the Greenpeace ship. 18 activists were arrested and brought ashore for questioning. Two activists, including the captain of the "Rainbow Warrior", remained detained. In the morning of Sep 11, the "Rainbow Warrior" remained at anchor off the port of Gdansk, guarded by a vessel of the Polish Coast Guard. The activists, however, continue their action on land, now targeting the cranes that will unload the cargo of the bulk carrier. Video: https://www.youtube.com/watch?v=vx46RP6syBo

Greenpeace’s ship, ‘Rainbow Warrior’, is doing its part to stop a Taiwanese tuna longliner illegally fishing in the tuna-rich tropical waters of the Pacific Ocean.Greenpeace is currently in the region to investigate and expose illegal fishing and came across ‘Shuen De Ching No. 88’ in the high seas close to Papua New Guinea’s waters. Enquiries with the Western and Central Pacific Fisheries Commission (WCPFC) and the Pacific Islands Forum Fisheries Agency revealed nothing matching the name or the ship’s radio call sign on their list of vessels authorised to fish in these waters or in the waters of any neighbouring Pacific Island countries.Around 75kg of shark fins from at least 42 sharks were found onboard the vessel. Under Taiwanese law and Pacific fishing rules, shark fins may not exceed 5% of the weight of the shark catch, and with only three shark carcasses reported in the log book, Greenpeace says the vessel was in clear violation of both.Internationally, over 100 million sharks are killed every year, and Greenpeace says illegal fishing like this is also leading to sharp declines in tuna levels.“What we’re witnessing right now is just the tip of the iceberg. The true extent of the Pacific tuna plunder remains hidden by vessels like this one, operating hundreds of miles from shore,” said Karli Thomas, oceans campaigner onboard ‘Rainbow Warrior’.Greenpeace says longline vessels are also out of control, being the most prevalent type of fishing vessel operating in the region. There are said to be more than 3,500 of the vessels currently authorised to fish in this part of the Pacific Ocean.“Longline fishing is well and truly out of control,” added Ms Thomas. “Lines covered with thousands of baited hooks and up to 170 kilometres (105 miles) long are deployed by vessels. Tuna species are the target, but other ocean creatures like sharks and turtles get caught on the lines.“Illegal behaviour has been hidden out at sea for too long. It’s time for fisheries to clean up, step up and be responsible. If they don’t, there will be no tuna left,” Ms Thomas concluded. Greenpeace East Asia informed Taiwan’s Fishery Agency that the ship was fishing illegally, but did not receive a response. It has since been confirmed with the WCPFC that the Agency submitted the fishing authorisation paperwork, and it has since appeared on the WCPFC Record of Fishing Vessels. Greenpeace says it appears Taiwan’s Fishery Agency is using Greenpeace information to cover up illegal activities and avoid responsibility.Greenpeace New Zealand has also reported the case to the WCPFC and neighbouring Pacific Island countries, and is adding the vessel to the Greenpeace pirate fishing blacklist and urging seafood retailers to stop buying from the vessel and its owner. Source: worldfishing

May 16, 2015, Port Vila: Greenpeace’s flagship vessel, the Rainbow Warrior, will arrive in Vanuatu’s capital of Port Vila on Monday to help deliver relief to Vanuatu’s outlying islands, many of which are still stranded without electricity or basic living essentials. Thousands of people are still in dire need of emergency shelter and goods, even two months after Cyclone Pam battered the island nation. “We’re very thankful that Greenpeace is donating its ship, the Rainbow Warrior, to help distribute aid to our remote communities,” Director of the National Disaster Management Office in Port Vila, Shadrack Welegtabit said. More at http://www.thejetnewspaper.com/2015/05/18/greenpeace-rainbow-warrior-brings-relief-to-vanuatus-stranded-islands/