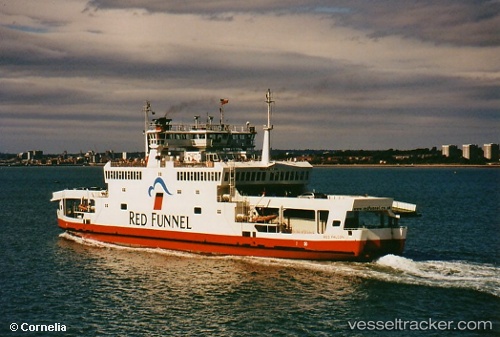 The temporary master of the 'Red Falcon' which sunk a yacht and ran aground off East Cowes became ‘cognitively overloaded due to high stress. the MAIB accident report has concluded. The Maritime Accident Investigation Branch has spent almost 18 months investigating the major incident, which saw the ferry almost crash into the Cowes Yacht Haven marina wall and narrowly avoided hitting a family sleeping on a yacht. On Oct 21, 2018, around 8 a.m. the 'Red Falcon' was navigating in severely reduced visibility in Cowes Harbour. Subsequently, the master lost orientation when the vessel swung out of control, departed the navigable channel and was spun around through 220 degrees. In his confusion, the master drove the ferry in the wrong direction resulting in a collision with the moored yacht ‘Greylag’ which was sunk on its mooring as a result. The ferry with 48 people on board then ran aground just 130 metres off of East Cowes esplanade, close enough to the shore that locals could connect to the onboard wifi. This all happened in between 50-200m of visibility. In their report, the MAIB explained that the ferry crew was struggling to maintain the required course resulting in the master taking over the controls from the Chief Officer. The vessel was swinging from starboard to port and by 08:10 had swung 220 degrees from its original heading. It was at this point the decision was made to abort the berthing and head back out of Cowes Harbour and the power was increased – but in the wrong direction. Just a minute later the car ferry crashed into Greylag at a speed of 6.5 knots, causing it to go under the water and immediately sink. The engines were pulled back but the ferry continued towards East Cowes Esplanade, running aground in soft mud around 130m from the shore. Once aground, the master ordered the anchor to be dropped and alerted the HM Coastguard. At about the same time the Coastguard received a distress call from the skipper of a nearby yacht and reports of cries for help coming from the fog. In response, lifeboats, Coastguard Rescue Teams and the Cowes Harbour Commission motor launch to search for persons in the water. It was eventually concluded that no one was in the water, but by this time a major incident had been declared. Later in the day, the 'Red Falcon' was manoeuvred to the East Cowes ferry terminal with the aid of a local tug, where all the passengers and vehicles were discharged. It has been confirmed that the crew were breathalysed with negative results. The MAIB has concluded that there were a number of safety issues on the day in question. The master became fixated upon the information displayed on his electronic chart and operating engine controls, ignored information displayed on other electronic equipment and became cognitively overloaded due to high stress. Furthermore, the bridge team became disengaged from the operation due to a lack of clear communications and emergency scenario training. It has also been identified that the hazard to people sleeping on yachts in Cowes Harbour had not been sufficiently mitigated within risk assessments. Red Funnel has been recommended to conduct regular assessment of ship-handling capabilities including pilotage by instruments alone and to review the shipboard method of determining orientation displayed on the ship’s electronic charting system. The Cowes Harbour Commission and the Cowes Yacht Haven have been recommended to review their risk assessments for a collision between a commercial vessel and raft of yachts moored at their marinas detailing mitigating measures that are within their control to implement. Report with photos: https://www.islandecho.co.uk/accident-report-into-red-funnel-grounding-and-sinking-of-yacht-released/

Ferry captain found not guilty over collision with yacht

On Dec 11, 2019, the then captain of the 'Red Falcon' has been acquitted of two maritime offences after his ship carrying 202 people was in collision with the motor yacht 'Phoenix' on Sep 29, 2018. Captain Ian Drummond was accused at Southampton Magistrates’ Court of failing to keep a proper lookout ahead of the accident involving the Red Funnel ferry as it headed to East Cowes on the Isle of Wight. The ferry was in collision with the 32ft motor-cruiser 'Phoenix', in the Thorn Channel, off Southampton, as both vessels were heading across the Solent. The ferry was carrying 20 crew and 182 passengers and the motor cruiser was being sailed by owner Peter Jackson, 57, and wife Julie with two others on board, but there were no injuries suffered in the accident. Mr Drummond, 63, was sitting in the lookout’s chair at the time of the collision and expert witness Captain John Simpson, a master mariner, told the trial that standing up would have helped eliminate the ferry’s blindspot. But District Judge Anthony Callaway ruled that Mr Drummond had used his experience to remain seated to maintain an overall best view round his ship including the use of CCTV monitors. He remained in the seat because he perceived it gave him the best view available. In the judgment, to move is likely to have hampered certain aspects of the lookout. Drummond was considered by his employer to be an experienced and safety-conscious captain who had made 6,000 crossings to the Isle of Wight without incident. The skipper of the 'Phoenix' has accepted a caution for his part in the incident. Jackson had almost no knowledge of Colregs (International Regulations for Preventing Collisions at Sea. No proper lookout was in evidence which endangered himself, his crew and the 'Phoenix', and to a lesser extent, the ferry. He simply did not see the oncoming ferry, irrespective of the Colregs. As a matter of common sense, this was another huge failing on the part of this skipper. Mr Drummond, of Sandringham Road, Southampton, was acquitted of failing to keep a lookout and misconduct of master likely to endanger ships, structures or individuals under the Merchant Shipping Act. He had been dismissed from his job following the incident but was seeking for this to be reversed at an employment tribunal to be held in 2020.

The 'Red Falcon' ploughed into a small pleasure boat with four people on board on Sep 29, 2018, because its captain failed to keep a proper lookout, a court has heard on Nov 18. Captain Ian Drummond allegedly sat static in his chair as the ferry smashed into the 10-metre motor cruiser almost forcing it to capsize. Drummond, 62, remained completely unaware the Isle of Wight-bound 'Red Falcon'had crashed into the cruiser during its journey across the Solent from Southampton, Hants, the city’s magistrates heard. One of the four people on board the cruiser, Julie Jackson, said she was thrown across the vessel by the impact. Along with her husband Peter and two other passengers, she scrambled to put on a life jacket while water began to engulf the vessel. Jackson said: “As I stepped out on the deck, I was made aware of a number of things happening all at once. I heard a loud bang, glass smashing, and saw a wall of red on my right-hand side. At the same time, I was thrown towards the seating area. We started to put on our life jackets.” Another passenger, Deborah Baxter said: “I heard a loud crashing noise and glass smashing behind me and I could feel a shower of glass pieces hitting me on my back and shoulder area. I could see a wall of red. I could not believe it. The ferry had carried on without stopping.” Prosecutors alleged Drummond would have spotted the yacht in front of the ferry if he had ordered a simple lookout. He also failed to view CCTV immediately in front of him, the court was told. Drummond denied misconduct of master likely to endanger ships, structures or individuals, and being the master responsible for conduct of a vessel contravening the merchant shipping regulations.