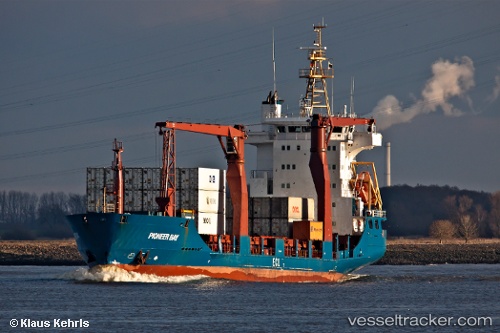 Unloading of containers gets slowly ahead

The offshore vessel 'Tor' along with a barge has unloaded approximately two thirds of the container cargo from the 'Rise Shine' almost half a year after its grounding, aided by epxerts from the Astafiev Terminal as well as regional and local authorities, Rosmorport structures and customs. There were 199 containers on board of a weight of 1.600 tons and 1.6 thousand tons and loaded with auto parts, fittings, printers, vacuum cleaners, diapers, air humidifiers and others. The regional branch of the Marine Rescue Service first had began pumping oil from fuel tanks, but this operation could not be completed completely due to bad weather conditions and because both the regional authorities and the municipal authorities quickly lost interest in the fate of the ship. The administration of the Nakhodka urban district practically did not react until local activists - environmentalists and residents worried about the possible pollution of ​​Kozin Bay. On Jan 20 the municipal authorities issued a press release outlining the state of affairs, reporting that "Rescue operations on the Rise Shine are under federal oversight." The head of Nakhodka, Timur Maginsky, on April 19 argued that it was "not their competence: "The entire operation is carried out by the federal state unitary enterprise "Rosmorport" and the relevant federal services. The container ship is at sea, and this is federal property, on which only federal authorities have the right to act. Please contact the relevant services." On April 22 it was reported that the issue of the progress of work on unloading the ship was considered by the municipal deputies at a meeting of the standing commission on ecology and improvement. “The period of typhoons is approaching, and we receive a lot of requests from Nakhodka residents who are concerned about the environmental situation, the state of the container ship,” said deputy Alexander Milchenko. At the meeting, under the leadership of the Far Eastern transport prosecutor, relevant issues were raised, and the most painful was unloading of the ship. This task was undertaken by Astafiev Terminal JSC, the only company that offered assistance. The representative of the company Dmitry Averyanov informed about the progress of the work. “We decided that we could unload containers from this vessel thanks to the availability of special equipment - a floating crane and a large barge that can operate in shallow water.” To date, 122 containers have been removed from the vessel, the entire upper deck has been cleared. The operation to unload containers continued. The cargo that has already been transported to shore will be transferred to the recipients. They have already been notified that they can take their property. The final stage is the removal of containers from the lower decks which were flooded due to a hole in the ship's hull. Employees of the Astafiev Terminal have to manually lift and get access to the holds to the containers with jacks. This is the most difficult part of the work, complicated by the pitching, roll of the vessel and damage to the containers themselves. Reports with photos and video: https://www.newsvl.ru/society/2022/04/14/208311/ https://www.newsvl.ru/society/2022/04/20/208480/ https://nakhodka.media/news/1274125/ https://oopstop.com/marauders-attacked-the-rise-shine-container-ship-that-ran-aground-off-the-coast-of-nakhodka/

Salvors of the Primorsky branch of the Marine Rescue Service continued the draining of fuel from the 'Rise Shine'. Vessels of the Marine Rescue Service ensured the pumping of fuel from the tanks of the damaged vessel, supplied electricity for the use of submersible pumps, constantly monitored the boom and, if necesary, reinstalled it. The 'Skimmer Sprut-PR' collected residual fuel oil from cargo hold No. 2 and residual fuel oil from the engine room. The total amount of fuel oil and oil-water mixture pumped out from the damaged vessel was 99 tons (105 cubic meters) as of Nov 18. Report with photo: https://portnews.ru/news/321461/

About 40 tons of diesel fuel have been drained from the 'Rise Shine' as of Nov 16. After the "Kapitan Balashov" with oil pumping equipment arrived from Vladivostok, hoses were installed to transfer fuel from the vessel. The work was complicated by difficult weather conditions. Wave heights reached 1,5 meters with a wind of 11 meters per second. To provide assistance to the crew from the port of Vladivostok, the rescue vessel 'Lazurit' of the FSBI Morspasluzhba was sent to the Vostok Bay. In addition, the operation was attended by employees of the Vladivostok SAR squad of the Main Directorate of the EMERCOM of Russia in the Primorsky Territory and a helicopter. Divers of the "Lazurit" examined the holds and the port side of the ship and found no damage so far. Fuel leaks and environmental pollution were not reported.