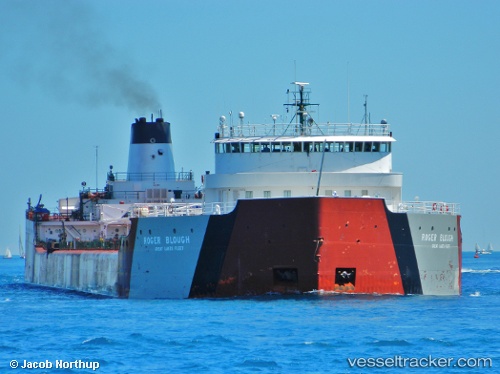 The 'Roger Blough' caught fire on Feb 1, 2021, at 2 a.m. at the Fincantieri Bay Shipbuilding in Sturgeon Bay, Wisconsin, where it was laid up for the winter. The Sturgeon Bay firefighters and several other fire departments responded. The firefighters initially had trouble finding the source of the fire. The vessel was moored between the 'James R. Barker' and the 'American Mariner' at pier 15. Sarter Marine tugs have been called to try and separate the ships. As of 10.30 a.m. the fire was thought to be under control, but firefighting was still ongoing. There were no reports of injuries. Reports with photo and video: https://www.mlive.com/news/2021/02/great-lakes-freighter-with-special-history-catches-fire-in-wisconsin-shipyard.html https://www.wbay.com/2021/02/01/crews-battle-fire-on-ship-in-sturgeon-bay/ https://doorcountydailynews.com/news/553739 https://www.wbay.com/2021/02/01/crews-battle-fire-on-ship-in-sturgeon-bay/ https://www.firehouse.com/operations-training/video/21208218/wi-firefighters-battle-fire-aboard-docked-ship

The U.S. Coast Guard captain of the port, Sault Ste. Marie, Michigan, on Aug 13 gave the "Roger Blough" permission Saturday to transit down the St. Marys River to anchorage in Potagannissing Bay in the vicinity of DeTour Village, Michigan. She had been anchored in Waiska Bay in Lake Superior since June 4 after grounding on Gros Cap Reef on May 27. Just before 11:30 a.m., she weighed anchor from Waiska Bay and began its transit down the St. Marys River, being escorted by the tug "Candace Elise", and it was expected the Blough will pass through the Soo Locks early in the afternoon. Coast Guard officials in Sault Ste. Marie and Milwaukee are currently reviewing the vessel's full transit plan as it intends to make its way to the shipyard in Sturgeon Bay, Wisconsin.

Laker back after repairs of grounding damage

The "Roger Blough" was back in the Twin Ports to pick up a load of iron ore pellets, a little more than two months after it ran aground in eastern Lake Superior on May 27 near Gros Cap Reefs in Whitefish Bay, about 10 miles west of Sault Ste. Marie, Mich. It spent a couple weeks there, as its cargo was offloaded to other vessels. The ship was freed and started traveling down the St. Marys River, escorted by a tug on June 11, eventually reaching Bay Shipbuilding in Sturgeon Bay, Wis., for repairs. She left Bay Shipbuilding on Aug 6 and arrived in Duluth on Aug 8. She picked up a load of iron ore at the CN docks in Duluth on Aug 9, departing during the early evening hours. The U.S. Coast Guard and the National Transportation Safety Board have been investigating the cause of the grounding. Report with photo: http://www.duluthnewstribune.com/news/4091195-two-months-after-running-aground-freighter-roger-blough-returns-twin-ports