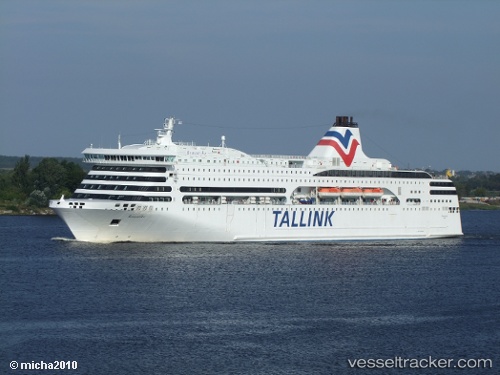 On Sep 7, 2021, the 'Romantika' requested the medical evacuation of an 8-year-old boy with an epilepsy attack. The ferry was abut 25 miles north of Dragonera island. The SAR helicopter Helimer 205 evacuates the child and his mother at 4.03 a.m. and transferred them to the Son Espases Hospital in Palma.

Romantika to repatriate Estonian and Latvian nationals from Sassnitz

On March 17, 2020, at 9.15 p.m. the Tallink Grupp in partnership with the Estonian Foreign Office has sent the 'Romantika' from Riga to Sassnitz to help and bring home Estonians and Latvians currently stuck in Europe due to closed borders. All German citizens who wish to use this opportunity to get home to Germany can buy tickets for this departure from the Riga terminal from 7 p.m. onwards. The journey from Riga to Sassnitz will take approximately 24 hours. The 'Romantika' will depart from Sassnitz on March 18 at 11.55 p.m. LT. The ship will sail to Port of Riga, Latvia and will arrive in Riga on March 19 at 11.55 p.m. The journey from Sassnitz to Riga is approximately 24 hours. Tickets for the Sassnitz-Riga departure can be purchased by Estonian citizens on Tallink’s website www.tallink.ee and by Latvian citizens on Tallink Latvia’s website www.tallink.lv Ticket sales for the Sassnitz-Riga departure was opened on March 17. Purchasing the ticket on the website prior to departure is mandatory. All passengers will be accommodated in cabins and will have the opportunity to purchase food on board. International cargo transportation companies can book cargo transportation for the Riga-Sassnitz departure for tonight, 17 March. Companies interested in booking cargo transportation for the Riga-Sassnitz departure should contact the Tallink Cargo team urgently. (Cargo office Latvia contacts: E-mail cargo@tallink.lv; Tel: +371 6709 9707). Access to the ports and a guarantee that the ship will not be quarantined is ensured by the Estonian Foreign Office together with the Latvian and German authorities. Negotiations will continue during this evacuation to reach an agreement according to which the 'Romantika' could continue to sail on the Sassnitz-Riga route also after the current trip to ensure a transport corridor between Germany, Latvia and Estonia. From March 17 entry restrictions are in force on the Estonian borders. More information regarding the restrictions and rules of entry can be found on the Estonian Foreign Office website. We urge all passengers to check that they have the right to enter the Republic of Estonia and Latvia before purchasing a ticket. German report with photo: https://www.ndr.de/nachrichten/mecklenburg-vorpommern/Ruegen-Sonderfaehre-bringt-gestrandete-Balten-nach-Hause,coronavirus642.html