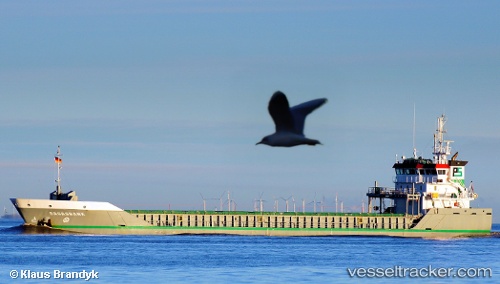 On Sep 3, 2019, around 5 p.m. the Cyprus flagged cargo m/v "Sea Prospect", enroute from Kantvik to Casablance, was in collision with the "Sagasbank", which was already berthed, inside the the New Southern Lock of the Kiel Canal in Brunsbüttel. The "Sea Prospect" slammed into the stern of the "Sagasbank". Both ships suffered dents and scratches above the water line. A wind gust had caught the "Sea Prospect" upon entering the lock which caused the accident. She continued the voyage at 6.15 p.m. with an ETA as of Sep 6, 6 a.m. The "Sagasbank" left the lock at 6 p.m. and continued the voyage from Figuaira da Foz to Gavle with an ETA as of Sep 6, 8 a.m.

The "Sagasbank" allided with the North Pier in Brake in the evening of June 6, 2012, while berthing. Both the pier and the ship suffered damage. The "Sagasbank" was breached on a length of five metres in the region of a lubricating tank. A quick reaction of the crew prevented a pollution of the Weser. According to investigations of the police a navigational mistake of the captain caused the accident. The ship may leave port only after repairs have been carried out.

On Mar 27, 2011, at 10.18 p.m. the "Sagasbank" ran aground in the Kolding Fjord en route to Kolding. The grounding occurred with a speed of eight knots. No injuries, no oil spills reported. The patrol vessel "Rota" was sent to the grounding site, but was replaced by the anti pollution vessel "Marie Miljø" in the morning of Mar 28. In the afternoon divers surveyed the ship's bottom. The ship was refloated on Mar 29 and berthed in the port of Kolding to unload its cargo. Danish report with photo: http://www.dinby.dk/kolding/skib-grundstodt-i-kolding-fjord