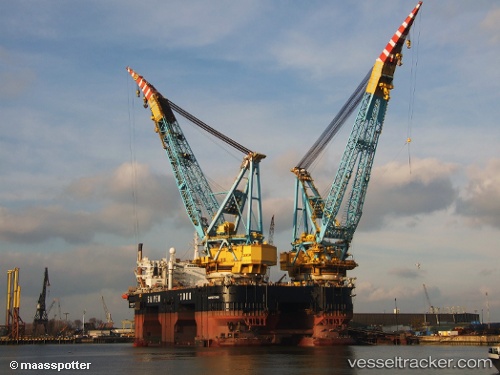 Crew had to stay on board due to case of coronavirus

The crew of about 300 aboard the 'Saipem 7000' had to remain on board in Eemshaven during the recent days because one of them was found to be infected with the corona virus. The infected man was taken to hospital on March 23, 2020. When it turned out that he had corona, it was decided in consultation with the GGD that no one was allowed on or off the ship. The man has now been released from the hospital. Because he had already isolated himself on board, the GGD did not consider it necessary to keep the rest of the crew on board any longer quarantined.

The Saipem 7000, one of the largest semi-submersible crane and pipelaying vessels in the world, has arrived at Damen Verolme Rotterdam (DVR) for a major upgrade of its current DP3 system to meet the new closed ring DP3 configuration and ABS EHS-P notation. Under DP3 EHS-P notation, the vessel will achieve an exceptional level of redundancy with 4 independent redundancy groups systems. The project will include the upgrade and modification of the vessel’s power system for load sharing, the installation of MV, LV and control cables, renewal of the MV and LV switchboards and the motor control centres, the installation of uninterrupted power supplies (UPS) and the creation of an A60 compartment. Detailed engineering is being executed by Damen Verolme Rotterdam in close cooperation with Saipem.

Saipem awarded $380m worth of contracts

Italy’s Saipem has been awarded new offshore E&C works, offshore drilling and onshore drilling contracts worth around $380m. The company has signed a contract with Eni Angola in relation to the West Hub Development project in Angola. The activities will be carried out by the offshore E&C division and encompass the engineering, procurement, construction and installation required for the development of the Vandumbu subseea field. In addition, Saipem has been awarded a new contract in the Gulf of Mexico involving the transportation and installation of the compression platform CA-KU-A1 on behalf of Dragados Offshore de Mexico. Operations will be carried out by the semi-submersible vessel Saipem 7000. Furthermore, Saipem has been awarded two new offshore drilling.