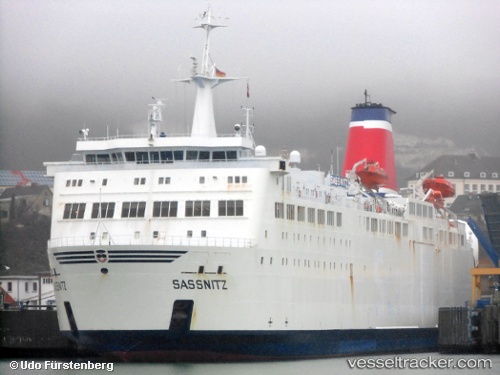 On April 8 Stena Line announced plans to permanently close the ferry route between Trelleborg and Sassnitz. The Stena Line and the German Works Council have now agreed and the route will be closed permanently. In total the closure and the reorganisation of the company will affect 130 German working positions. The 'Sassnitz', that was earlier operating the route, is currently laid up in the Port of Uddevalla. The vessel will be handed over to Stena RoRo and either be sold or chartered.

Ferry laid up in Uddevalla

Stena Line has moved the 'Sassnitz' from Mukran to Uddevall. The ferry, which had served the Trelleborg-Sassnitz line until March 14, was currently docked at berth 7. The preliminary plan was for the ferry to be moved on April 28 to a lay up berth in Uddevalla for the time being. The ship will continue to have German personnel on board. The Port of Uddevalla was a good choice both from a cost and efficiency point as Stena already has the 'Stena Saga' laid up there. Video: https://www.youtube.com/watch?v=NwxfQ7oPTnk

Sassnitz laid up after ferry route was closed

The Stena Line will close the Trelleborg-Sassnitz route permanently which was served by the 'Sassnitz'. The route had been temporarily suspended since March 14, 2020, due to the corona crisis, but now the shipping company has decided that the combined freight and passenger route will not be reopened. Around 300,000 passengers have used the route between Trelleborg in Sweden and Sassnitz every year, while freight volumes have been declining. Since the shipping company expects the passenger number would reach its old level well into 2021 at the earliest, it will be too costly for Stena Line to keep up the route. The ferry, which has been operating the route, remained docked at the port of Mukran near Sassnitz since March 16. Following the permanent closure, Stena Line contiued to operate two routes between Sweden and Germany, one being Trelleborg-Rostock, which is operated by the two ferries 'Mecklenburg-Vorpommern' and 'Skåne' as well as Gothenburg-Kiel, where the ferries 'Stena Scandinavica' and 'Stena Germanica' actually have 12 departures a week. Three weeks ago, the shipping company announced that the Frederikshavn-Oslo route, which has been operating for 40 years, had to be permanently closed due to the corona crisis.