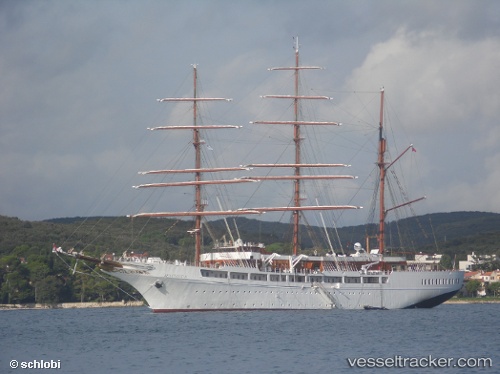 Sea Cloud Cruises announced it has promoted Kathryn Whittaker to captain of the 94-passenger Sea Cloud II. Whittaker is the first female Canadian captain of a passenger cruise ship, the company said, and the first female captain for Sea Cloud. Whittaker’s path to captain is an unconventional one. Her family doesn't consist of sailors, and her voyage didn't start at an early age in maritime academy. While at university in Toronto she took time off from school and worked on touring boats in Toronto Harbor for three years, and then made her way to Sea Cloud as a deck hand in 1996. This first position on a sailing ship sealed her fate, and began her journey into securing her captain’s license.

FANTASTIC SEA CLOUD II IMO 9171292 9HUE6 MALTA GIJON HD, en Aviles. This private cruise in the traveling members of a US Christian society, make a nine-day trip from Lisbon to San Sebastian they divided into four levels, with the third Aviles. Before reaching their destination they have a new scale in Bilbao. It is not the first time that crosses the waters of the estuary. After its launch in March 1999 in the shipyards Gondán Figueras (Castropol), the 'Sea Cloud II' motor sailed in May 2000 to Aviles. In the Asturian city they are then installed her three masts, the rigging, the sails and wooden deck, among other things, and part of its luxurious furnishings, sparing no efforts in order to satisfy the most refined tastes. Eight months later, once completed sea trials, I headed to Ferrol, where the hull was painted. The naming ceremony was held in 2001 in Las Palmas and since then operates with the company 'Sea Cloud'. Twenty rigged sails, measures 117 meters in length with bowsprit (102 without it), 16 wide and 5 of draft and displaced 3,130 tons. With medium wind sails seven knots and if they are especially favorable can reach sixteen. For periods of calm and maneuvers in port it has two engines yielding 2,480 horses. After leaving Lisbon, the Sea 'Cloud II' he stopped in Oporto and the Cies Islands, with excursion to Santiago de Compostela, and before reaching San Sebastián intends to call at Bilbao. As for ticket prices, the website of the company as a special offer four-night cruise in September between Barcelona and Nice from 2,225 euros per person.