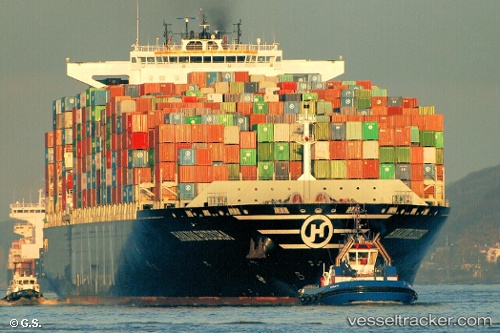 Container ship contaced by other in Busan

At the new port of Busan the 'Milano Bridge', under the conduct of a pilot, allided with the container cranes 81, 84 and 85 during cargo oprations on April 6, 2020, at 2 p.m. LT at berth 7 of the North Terminal International Terminal, while approaching berth 8, coming from Shanghai. The 44 year old operator of crane 85 managed to jump from a height of 5 meters to escape and suffered minor injuries to the ankle and was treated in hospital. The impact caused crane 85 to collapse, and the cranes 81 to 84 were pushed off the rails and could no longer be moved. Crane 81 was also at risk to collapse. Before the allision, the container ship also came in contact with the 'Seaspan Ganges' at berth 7. It was expected that it would take 18 months to replace the gantry crane No. 85 and 3-5 months to get crane 84, which was pushed out of the rails, back to working condition if there was no major damage to the structure. In addition, the cranes 82 and 83 did not seem to have suffered major damage. The Busan Coast Guard was investigating the cause of the accident. Chinese reports, photos and video: http://m.kmib.co.kr/view.asp?arcid=0014448949 http://www.dailylog.co.kr/news/articleView.html?idxno=20022#09sf https://www.youtube.com/watch?v=pTQKqNN8j3Q http://www.shipspotting.com/gallery/photo.php?lid=3137644#

The HANJIN BUDDHA is constructed by Jiangsu New Yangzi Shipbuilding Co., and is the first to be built using Seaspan’s so-called SAVER design, featuring a fuel efficient hull developed by MARIN and Marine Design and Research Institute of China (MARIC).The Hanjin Buddha will commence a ten-year, fixed-rate time charter with Hanjin Shipping Co. The ship is the first of a total of three vessels to be chartered by Seaspan to Hanjin.