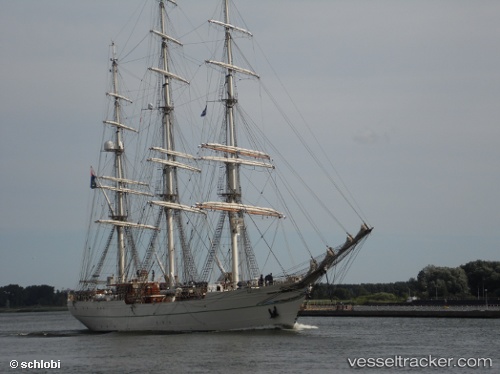 Shabab Oman II (Oman Youth II), the Royal Navy of Oman's latest sailing ship to train young sailors, on Friday arrived at Shuwaikh Port as part of a world tour. The global voyage, themed "Cooperation sail 2015” is the second time the Royal Navy of Oman has undertaken such a mission. The first training vessel to carry the name, Shabab, sailed in 1979 on a world tour to promote peace, friendship and love among the people of the world, according to Omani Ambassador to Kuwait Hamid bin Said bin Salim Al Ibrahim. Shabab Oman II was built in the Netherlands to carry on this mission, according to the navy. Kuwait is the first leg of the ship’s Gulf tour. The vessel will visit all Gulf Cooperation Council (GCC) states, and it is due in Muscat on 10 November, Al Ibrahim said. With a crew of 90 from the Omani and GCC navies on board, the vessel seeks to shed light on the "Sultan Qaboos Sailing Award'" and Oman's maritime history.

On 12 September, the Royal Navy of Oman formally accepted ownership of its new sail training vessel at a ceremony at Damen Schelde Naval Shipbuilding in Vlissingen, the Netherlands. The three-masted steel clipper, named RNOV Shabab Oman II, will sail the world’s oceans as an ambassador for Oman, demonstrating the country’s centuries-old maritime tradition. The 87-metre vessel is Damen's third such clipper, proving the value of Damen’s reliable craftsmanship and engineering. Among the guests at the ceremony were representatives of the Royal Navy of the Netherlands and Omani diplomats. Speaking on behalf of the Omani Royal Navy, Commodore Khalifa said, “This new vessel will sail around the world with a message of peace and friendship. Thank you to Damen for building this magnificent ship for us.” The Dutch flag was subsequently lowered from the stern spanker line to be replaced by the Omani Naval ensign while a local orchestra played the Omani national anthem. “This is a proud moment for Damen Shipyards,” said Damen CEO René Berkvens during the ceremony. “I wish the crew and captains of the Shabab Oman II fair winds, following seas and many returns to port.” Mr Berkvens described the clipper as “an extremely powerful performer – a true diamond of the sea.” The acceptance ceremony follows the successful completion of sea trials in late July that took place in North Sea coastal waters around Vlissingen. “During the trials, we checked everything that cannot be tested while moored in the harbor,” explained Damen Project Manager Arnoud Both. Shabab Oman’s impressive 2,700 m² sail area was also put to the test. Further Infos & Video: http://www.damen.com/en/news/2014/09/royal-navy-of-oman-takes-delivery-of-damen-clipper