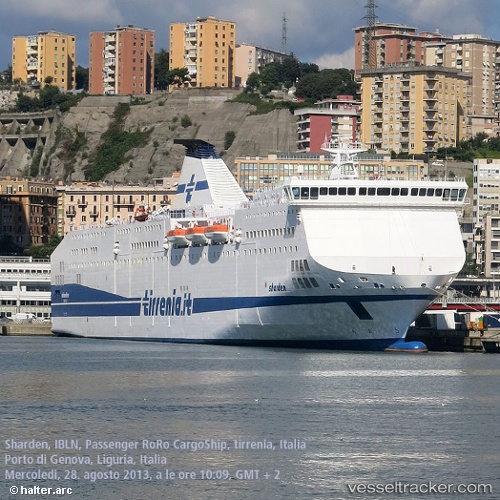 On Feb 14, 2018, at 8 a.m. the "Sharden" allided with the Colombo pier at Genoa due to an incorrect berthing manoeuvre upon the arrival from Porto Torres. The hull suffered considerable damage at the port side stern near the waterline. No one was injured, and the passengers were disembarked the usual way once the ferrry was berthed. The Tirrenia Company immediately notified the competent authorities of the accident. Repairs were to be effected as soon as possible. At 1.30 p.m. the ferry entered Genova Drydock for this purpose. The ferry "Janas" was called in as a replacement ferry and started the Genoa-Porto Torres line in the evening of Feb 15. Also the Colombo Pier suffered signifant damage due to the impact and was investigated by divers. The "Sharden" left the yard again on Feb 16 at 9 p.m. and returned to its schedule. On Feb 17 at 8.30 a.m. she called at Porto Torres again. Italien reports with photos: https://www.ogginotizie.it/porto-di-genova-traghetto-sharden-urta-banchina-nessun-ferito-e-allarme-accosti/ http://genova.repubblica.it/cronaca/2018/02/14/news/urto_violento_del_traghetto_sharden_contro_la_banchina_di_ponte_colombo-188815077/ https://www.vistanet.it/cagliari/blog/2018/02/14/foto-genova-si-schianta-sulla-banchina-la-nave-tirrenia-proveniente-dalla-sardegna/ http://www.meteoweb.eu/2018/02/traghetto-urta-banchina-porto-genova-danni/1044363/

Under unexplained circumstances, a Munich woman, Imelda Bechstein, was killed on the "SHarden" enroute from Sardinia to Genoa. The 74-year-old was with her husband on vacation in Italy and disappeared suddenly during the crossing. Despite extensive search also with divers she could not be found. The husband reported her missing. Two weeks later, her body was discovered in a maintenance shaft of the propeller. The accident probably occurred on Oct 30, 2016, land was only now known when husband Ernst B. (74) communicated the proceedings to the public. A spokesman for the Munich police said the case had not been investigated in Germany as it was clear that she had disappeared on the ferry. The corpse of the Munich woman is still in the forensic medicine in Genoa. The autopsy had shown no signs of violence; She had died in the night of her disappearance. The Italian authorities launched an investigation against the captain of the "Sharden" for negligent killing. The husband has criticised the ship’s crew for not carrying out a proper search of the vessel as the body has only been found two months after she went missing. She was last seen by her husband on a sun lounger. He searched for his wife before notifying the ferry staff. The captain then gave the order to search the entire ship, but no trace of herwas found until her body was discovered recently in a maintenance shaft off the engine Room. Bechstein believes his wife should not have been able to enter the engine room area, and she might still have been alive” today if a more thorough search of the ferry had been carried out by the crew. A post mortem examination has revealed that Imelda, who lived in Munich died the night she disappeared.

After the accident of the "Sharden", fifty passengers have sailed on board the ferry "Shintu" of Saremar and arrived at Olbia in the morning of Feb 4, the other 212 passengers departed at 11.30 p.m. on board the "Nurages" of Tirrenia. The "Sharden" was stuck 1,5 metres in the breakwater, which has caused a gash of 30 meters. The "Sharden" had just unmoored when, probably due to a strong wind gust she lost control and crashed into the Colombo Quay In the morning of Feb 4 further surveys were carried out further and it was found that there were flooded compartments. The casualty was oored at dock 20 in the port of Civitavecchia with the aid of four tugs on Feb 4 at 5.50 p.m.