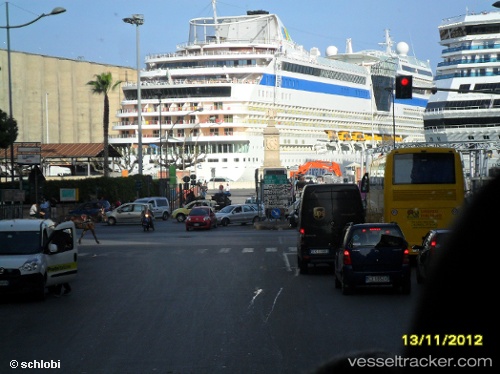 News that water shortages are due to the needs of visiting cruise ship passengers has left a sour taste in some Sicilians' mouths. The Sicilian capital of Palermo is used to water crises but the latest has left residents irate. Hundreds of homes in the port city were left without drinking water due to emergency maintenance work, and – more upsettingly for local residents – because water in two residential areas was diverted to meet the needs of tourist cruise ships transiting in the port. "Citizens of Palermo are informed that that the water disruptions that have occurred these days are due to the drawing of water by cruise ships in transit through Palermo," AMAP, the provider, said in a written apology on its website on August 23rd. The neighbourhoods of Zisa, Borgo Vecchio and via Notarbartolo were affected by the shortages, according to a report in Repubblica. Temperatures reached highs of 31 degrees Celsius (87.8 Fahrenheit) on August 23rd and 24th. 174,000 tonnes of water were loaded onto cruise ships on Monday and Tuesday this week, claims another report in Italian daily Repubblica. On Tuesday, one ship alone, the Costa Fascinosa, took 452 tonnes of water onboard. Palermo is the last city in Italy that allows cruise ships to make stops to restock water for passengers: all other Italian ports have banned such refuel pit-stops because of water shortages. https://www.thelocal.it/20170824/cruise-ships-cause-water-shortage-for-palermo-residents

Italy's migration crisis took on a deadly new twist Thursday as police in Sicily reported that Muslim migrants had thrown 12 Christians overboard during a recent crossing from Libya, and aid groups said another 41 were feared drowned in a separate incident. Palermo police said they had detained 15 people suspected in the high seas assault, which they learned of while interviewing tearful survivors from Nigeria and Ghana who had arrived in Palermo Wednesday morning after being rescued at sea. The 15 were accused of multiple homicide aggravated by religious hatred, police said in a statement. The survivors said they had boarded a rubber boat April 14 on the Libyan coast with 105 passengers aboard, part of the wave of migrants taking advantage of calm seas and warm weather to make the risky crossing from Libya, where most smuggling operations originate. http://www.haaretz.com/news/world/1.652248