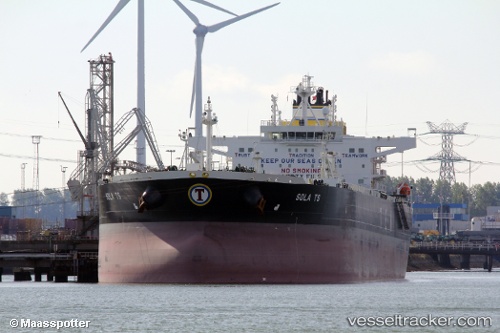 Tanker owner agreed to pay compansation for loss of fregate

The owner of the 'Sola TS', which had collided with the Norwegian frigate 'Helge Ingstad' in the Hjeltefjord on November 8, 2018, has agreed to pay about $27 million in compensation to the Norwegian government for the loss of the warship. In late February 2019, after lengthy delays due to weather, Helge Ingstad was raised and transported to a pier in Hanøytangen for evaluation. Facing a repair bill of $1.4 billion - three times the newbuild cost of the vessel - the Royal Norwegian Navy declared her a total loss. In early 2021, Norway's defense procurement agency contracted with a local scrap yard to demolish the wreck at a cost of $7.1 million, spending extra to ensure that any sensitive technology aboard the vessel would remain in the country. A preliminary report from Norway's Accident Investigation Board found that a significant share of the fault for the collision lay with the watchstanders of 'Helge Ingstad's bridge team, who believed that the oncoming tanker was a fixed object up until the final moments before the collision. Despite extensive attempts at communication between the tanker, the VTS center and the 'Helge Ingstad', the frigate's bridge team did not attempt to alter course until they were in extremis. The tanker's bow struck Ingstad amidships on the starboard side, causing extensive damage and flooding. The settlement agreement with Twitt Navigation covers a small fraction of the $490 million value of the frigate and the $80 million that Norway spent on salvage expenses. It represents an end to the negotiations, but it still leaves the capability gap created by the frigate's loss: The 'Helge Ingstad' was one of only five main surface combatants in the Royal Norwegian Navy, and her absence represents a considerable reduction in capacity.

The lawsuit filed against the owner of the 'Sola TS', which was supposed to take place in September 2020, has been postponed until March 2021, to give the involved parties more time to prepare for the case. On Nov 8, 2018, the tanker was in collision with the Norwegian frigate 'Helge Ingstad' near the Sture terminal.

The Norwegian Accident Investigation Board has published its report into the collision between othe 'Helge Ingstad' and the tanker 'Sola TSÄ. It found a number of failings by the navy crew during the incident near the Sture oil terminal and has issued 15 recommendations. They aim to address issues surrounding crew training and competence, and use of the AIS, which was in passive mode at the time of the incident. The report also recommended that the navy install voyage data recorders on all its vessels. The collision between the tanker,which was carrying 625,000 barrels of oil, and the frigate in the early hours of November 8, 2018, forced the evacuation and closure of Equinor's oil terminal in the vicinity. While all crew were accounted for, the frigate, which was en route to the Haakonsvern naval base after participating in the Nato exercise Trident Juncture when it hit the tanker, took on water and listed, leaking a minor amount of fuel into the waterway. It sank a few days later. The training activity being carried out on the day of the incident meant that “the bridge team’s capacity to address the overall traffic situation was reduced”, according to the report, which added that the navy “lacked competence requirements for instructors and procedures to ensure the functioning of the bridge team while administering training”. Bridge leadership and teamwork had not been expedient, the report said. It highlighted how the frigate's navigator in charge “did not pick up on the signals of danger” and that a more experienced navigator would have been better able to manage the situation. The crew thought the tanker was stationary and had not detected the flashing lights from the tanker warning of its approach. Other recommendations for the navy included medical fitness and vision testing, and monitoring fatigue. The report also shone a light on the Norwegian Coastal Administration's Fedje Vessel Traffic Service, which should be reviewed and improved, as it did not monitor the movements of the frigate through the waterway and did not adequately inform traffic in the area that the tanker had left the terminal. It advised the tanker company about safe use of deck lights ensuring that they do not reduce the visibility of the navigation lights. Full report at https://www.aibn.no/Marine/Published-reports/201908-eng