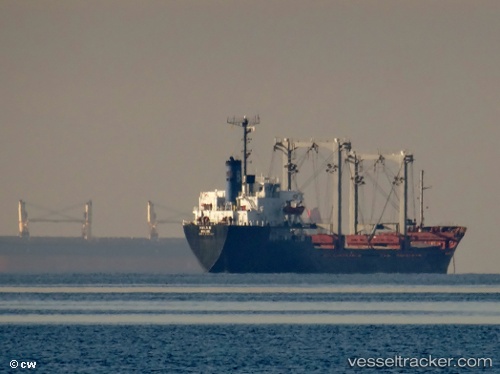 The "Hala B" has been towed from Chioggia anchorage to the inner port. Damage surveys and further technical inspection have been carried out by the class surveyors and the owner's technical teams. The ship sailed from Chioggia on May 15 at 10.15 a.m. under tow by the tug "Paraggi" (IMO: 9802968) bound to Chalkis, ETA May 20.

Fire put out in the night

Firefighters have finished the operations of extinguishing the fire on the "Hala B" which broke out in the rooms adjacent to the engine room on Feb 26 at 6 p.m. aboard the lumber loaded ship. The Port Authority jointly with the Coast Guard of Chioggia had coordinated the evacuation of the 18 crew members, and the intervention of six tugs and a vessel of the Fire Brigade. The tugs with the water cannons constantly cooled the hull, prevented the spread of the fire, and allowed its progressive downsizing to a few outbreaks. On Feb 27 at 1.15 a.m. it became possible that the teams of the Provincial Command of the Fire Brigade of Venice, who transshipped to the scene with their boat and the Coast Guard patrol boats, boarded the ship. The extinction of the remaining hotspots ended around 03.30 a.m. During the entire night and in the morning the vessels "CP 287", "CP826" and "CP 541" of the Coast Guard of Venice and Chioggia, as well as the helicopter "Nemo 11" of the Nucleo Aereo di Pescara have monitored the ship and the surrounding waters for the possible emergence of risks for the safety of navigation and pollution, but none was observed. Report with photo: http://www.liberoreporter.it/2019/02/cronaca/guardia-costiera-spento-incendio-su-nave-hala-b.html

Fire on bulkcarrier out of control

A fire broke out in the engine room of the "Hala B" which was moored at Chioggia anchorage, three miles off the port, on Feb 26, 2019, around 6 p.m. Firefighters boarded the ship but couldn’t do much because of the faulty firefighting equipment on board with malfunctioning generators and without water pressure, so the fire spread around and engulfed the superstructure. It was decided to evacuate all 18 crew members one hour after the fire broke out. The ship was loaded with timber. Six tugs and patrol boats intervened and on Feb 27 were still engaged in the attempt to extinguish the fire. The firefighters from Chioggia and Mestre tried to prevent the fire from spreading to the cargo. The operations of the tugs allowed the significant lowering of the temperature to 20 degrees centigrade. The staff of the firefighters team on board completed the operations. The fire damaged the stern, the engine room and the accomodation area but did not affect the cargo. Reports with photos and video: https://video.corrieredelveneto.corriere.it/incendio-bordo-nave-hala-b-dall-elicottero/b3bf248a-3a7c-11e9-ac39-4542c9a2b7ec https://worldmaritimenews.com/archives/272218/crew-evacuated-from-burning-ship-off-chioggia-italy/ https://www.veneziatoday.it/foto/cronaca/nave-cargo-in-fiamme-al-largo-di-chioggia/#whatsapp-image-2019-02-26-at-20-38-59.html http://www.meteoweb.eu/2019/02/chioggia-guardia-costiera-salva-18-persone-dellequipaggio-di-una-nave-mercantile/1228358/