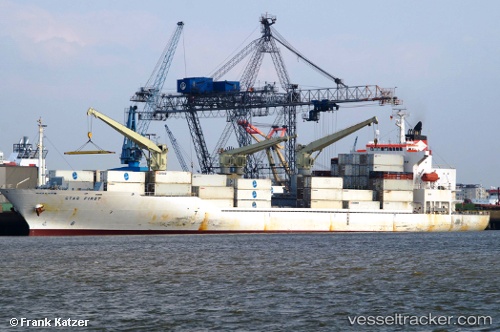 All but six containers tracked or washed ashore

Three more containers lost from the "Star First" have washed ashore in Dunkirk, two in Lombardsijde, two in Middelkerke and Nieuwpoort. In the afternoon of Dec 1 one more container spotted at the height of the Wenduinebank in De Haan. The Voluntary Rescue Service in Blankenberge was to tow it to shore. Six of on the whole 15 Containers remained unaccounted for, but have probably broken up. In Ostend some large fragments were recovered. Ship Support will store the largest pieces, while the Civil Protection will clean the beaches. There were, among other palettes, also insulation and bananas on the beach. The Provincial Governor Carl Decaluwé will inform the mayors of the steps taken. Reports with photos: http://www.nieuwsblad.be/cnt/dmf20151201_01998775 http://deredactie.be/cm/vrtnieuws/binnenland/1.2511809

Still not all containers located

In the morning of Nov 30 the maritime prefecture of the English Channel and the North Sea has deployed a Dauphin SP helicopter of the Navy base in Le Touquet to conduct an observation flight and relocate the lost containers of the "Star First" off Nord Pas de Calais. The crew traced three containers stranded close to the Walde Lighthouse near Calais. One was empty, another fully loaded with Chiquita bananas. They should be promptly removed. Four more drifted towards Belgian territorial waters. Two of them grounded at Dunkirk and other two in Middelkerke, Westende. Other containers have not been located. The CROSS Gris-Nez informed ships transiting the area of ​​the presence of these containers and collected information and any observations made at sea. Ships were required to carry out a proper lookout. The sea conditions remained being difficult. French reports with photos and videos: http://www.francetvinfo.fr/france/video-un-navire-marchand-perd-ses-conteneurs-au-large-du-pas-de-calais_1199669.html http://france3-regions.francetvinfo.fr/nord-pas-de-calais/marck-des-containeurs-echoues-sur-la-plage-866291.html?utm_content=buffer5cf4d&utm_medium=social&utm_source=twitter.com&utm_campaign=buffer http://www.la1ere.fr/2015/11/30/des-bananes-flottantes-en-mer-du-nord-310913.html http://information.tv5monde.com/en-continu/conteneurs-la-derive-en-mer-du-nord-en-raison-du-mauvais-temps-71100 http://www.1001infos.net/belgique/une-douzaine-de-conteneurs-charges-de-bananes-a-la-derive-en-mer-du-nord.html http://www.republicain-lorrain.fr/actualite/2015/11/30/un-cargo-perd-ses-conteneurs-dans-la-mer-du-nord

Enroute from Almirante to Sheerness the "Star First" lost at least 12 reefer containers on Nov 28 at 9.30 p.m. in the traffic separation scheme zone Pas-de-Calais, off Boulogne-sur-Mer in a south-westerly wind force with six Beaufort gusting to nine and wave heights up to four meters. The CROSS Gris-Nez deployed the tug "Abeille Languedoc" from Boulogne-sur-Mer to relocate the containers which were posing an immediate danger to navigation. In the morning of Nov 29, a Falcon 50 aircraft of the Navy participated in the search efforts. At 12 p.m., the aircraft had located 12 of the boxes. At 3 p.m. an EC 225 helicopter of the Navy base in Maupertus was hired to drop a tag transmitter on one of the containers to monitor their drift. On Nov 29, three containers were found stranded near the Walde Lighthouse near Calais. Four, two equipped with a beacon, continued to drift towards Belgium. At least five others have not yet been identified. The tug "Abeille Languedoc" docked in Dunkirk in the late afternoon remaining in alert position. Other containers continued to drift in a northeasterly direction, towards Belgium. Weather conditions on area make recovery operations complicated. The operations were carried out in close cooperation with the Belgian maritime authorities. An Urgent Notice to Mariners (AVURNAV) has been issued by the maritime prefecture of the Channel and the North Sea. Reports with photos: http://www.lasemainedansleboulonnais.fr/boulogne-sur-mer/un-navire-perd-des-conteneurs-au-large-de-boulogne-ia678b0n155054 http://www.lavoixdunord.fr/region/trois-des-conteneurs-de-bananes-tombes-a-l-eau-a-ia33b48599n3191360