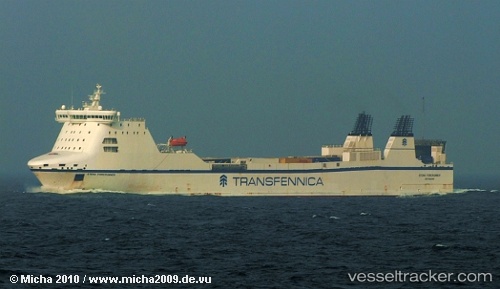 Another Stena company has opted for scrubbers for Emission Control Area (ECA) compliance, with Stena RoRo AB having signed a deal with CR Ocean Engineering, L.L.C. to install a pair of scrubbers aboard the Stena Forerunner, CR Ocean announced. The systems will help Stena to keep within new sulfur regulations, which will limit sulfur content in marine fuel used in ECAs to 0.10 percent by weight. The smaller size of the scrubber system minimizes the amount of ship modifications that have to be made, according to CR Ocean. Source: http://shipandbunker.com/news/emea/461829-stena-roro-signs-deal-for-scrubbers

Search for stowaways in Hanko

The Finnish border guard, police and customs were looking for stowaways onthe "Stena Forerunner" after it had arrived in Hanko on May 9, 2012. Though the entire ship and its cargo were searched, none were found. The crew claimed to have seen two men around the 30s on deck when the ship was at sea in the night. They found fresh footprints in places where the crew was not used to be. The men may have jumped over board as the ship entered the port, or they managed to hide on the ship.