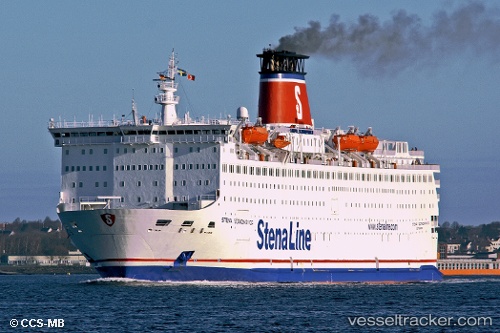 The 'Stena Spirit' upon entering port coming from Gdynia, suffered engine trouble in Karlskrona on Sep 16, 2019, at 10 a.m., missed its dock and was in collision with the Norwegian offshore vessel 'NKT Victoria' near the quay in windy conditions. The ferry was on its way into the Verkö port at Karlskrona when she was suddenly hit by a blackout. In the strong wind, she drifted rapidly towards the lighthouse on Verkö. Before the ferry got the engines started, it let the anchor go in an attempt to stop the drift towards the lighthouse, but hit the bottom. When the ferry got back on its engine, it backed towards the quay, thereby hitting the moored cable ship. Stena sent its own divers down to check the hull for any damage. The situation after the blackout was aggravated by the harsh winds that contributed to accelerate the process. No spills have been detected neither from the "Stena Spirit" nor from the "NKT Victoria". No one was injured in the accident either. Emergency services were notified, but no ambulance has been called. The Coast Guard vessel 'KBV 003' was deployed for investitations. Both ships berthed in the Verkö Port around 10.15 a.m. The ferry had 740 passengers and 103 crew members on board. She left the port again at 9.30 p.m. and arrived back in Gdynia on Sep 17 at 7.15 a.m. Swedish report with photos: https://www.svt.se/nyheter/lokalt/blekinge/passagerarfartyg-i-kollision-med-fartyg-stort-raddningspadrag

During the return trip of the "Stena Spirit" from Gdynia to Karlskrona on Apr 8, 2017, Poland surprised many passengers on the ferry with a military exercise. Three military vessels approached the ferry at full speed, soldiers boarded with weapons drawn and searched the ferry and then left again. People panicked after the events in Stockholm thinking the ship had been hijacked. According to Stena Line, information should have gone out of the speaker system on what to expect, but in fact nobody knew anything about an exercise. A process has been started to find out what might have gone wrong. The situation worsened during the morning hours because of an unexpected technical problem a while after the exercise as the ferry experienced a blackout which cause a short stop. After half an hour, the vessel was operational again.