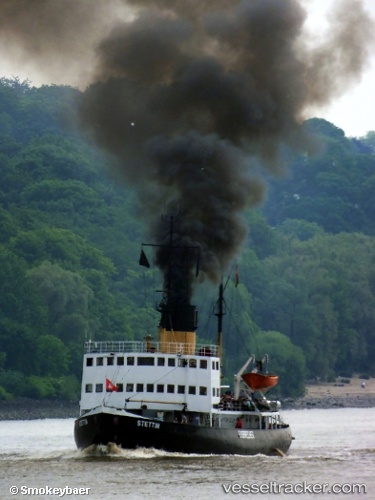 Breach under repair 2,5 years after collision

More than 2,5 years after its collision with the ferry 'Finnsky' on the Warnow on Aug 12, 2017, the 'Stettin' finally entered the Norder Yard in Hamburg on Jan 24, 2020, at 7 p.m. for permanent repairs. Drydocking had been planned for this day, but dense fog prevented the ice breaker from being shifted there, so the planned dock date was now on Jan 27. The repairs were expected to take eight weeks. The starboard side of the ship had been sliced on a length of two meters at starboard side, luckily above the water line. The breach had only been patched with a steel plate which had been welded onto the hull. Now it is to be restored in original condition with rivets. At this opportunity the hull will also be painted and general maintenance be carried out. The repairs costs were expected to take be about one million Euros. During the Port Birthday in Hamburg in May the 'Stettin' will offer tours again from its berth in Hamburg-Övelgönne.

In the foremidday of Aug 12, 2017, the German steam ice breaker "Stettin", which was just about to leave the port of Rostock in the course of the Hanse Sail parade with 180 passengers on board, slammed into the port side stern of the "Finnsky", which had just arrived from Helsinki, off the overseas port between the berths 60 and 64. The hull of the ice breaker was breached on a length of two meters above the water line. 10 passengers were injured and medically treated, the others disembarked onto other ships joining the Hanse Sail Parade.. The "Finnsky" docked at berth 60, the "Stettin" returned to port for investigations. German report with photo and video: https://www.svz.de/lokales/rostock/faehre-reisst-der-stettin-den-rumpf-auf-id17551356.html

Stettin stopped only by ship's stern

The "Stettin" ran into the stern of the Gibraltar-flagged cargo m/v "Richelieu", 2545 gt (IMO:9369526), on Aug 20, 2011 at 2 p.m. when about to moor in the northern lock of the Kiel Canal in Brunsbuettel. While the icebreaker suffered only litte damage, the stern of the "Richelieu" was dented. The ship which had departed from Hamburg in the morning and was bound for Kaliningrad berthed at the railway pilings in Brunsbuettel for investigations which lasted until 7.30 p.m. The "Stettin" which was coming from Hamburg and was bound for Rendsburg was allowed to continue its voyage already one hour after the accident. At 6.40 p.m. it safely berthed in Rendsburg.