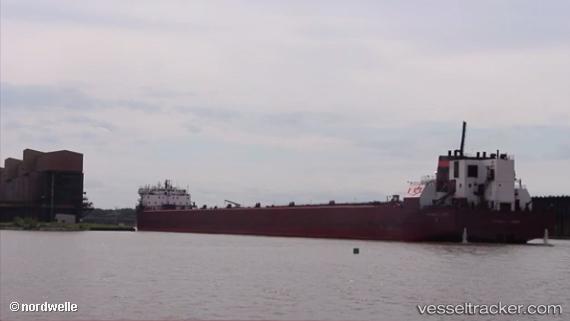 First ships of the season ready to pass through Soo Locks

SAULT STE. MARIE, MI (WPBN/WGTU) -- After a ten week hiatus for repairs, the Soo Locks are opening up for the shipping season. The first ship, the Stewart J. Cort, can pass through one minute after midnight Saturday. Earlier Friday, the captain got some special recognition. Around one in the afternoon, self proclaimed "boat nerds" lined up to watch and photographed the thousand foot behemoth drift down the St. Mary's River. It was a tight race between the Stewart J. Cort and the Philip R. Clarke. http://upnorthlive.com/news/local/first-ships-of-the-season-ready-to-pass-through-soo-locks

The man who jumped from the "Stewart J. Cort" and was being missing since, had been confronted about alcohol use before, as the company has a zero tolerance policy. As reported by the Mason County Sheriff, the man was confronted about his drinking and was told to stay in his quarters until the ship entered the port. Instead, the 41 year-old man from Cleveland jumped into the Lake Michigan.

The Coast Guard has suspended the search for a man who jumped overboard from the "Stewart J. Cort" near Big Sable Point in Lake Michigan in the early morning of Aug 23, 2015. Just before 2 a.m., watchstanders at Coast Guard Sector Lake Michigan received a report, via Rescue 21 on VHF-FM Ch. 16, from the vessel that they had a man overboard approximately 3-4 miles offshore of Big Sable Point. Crew members witnessed the man climb over the rail and jump from the vessel. The crew members immediately deployed three life rings and notified the navigation bridge. The vessel turned and began a systematic search for the man. Due to conditions at the time and the impending weather forecast, the decision was made not to deploy the vessel’s small workboat. The vessels "Samuel D. Champlain", "Joyce L. Van Encevort" and "Vikingbank" were also in the area also began to assist with the search. Rgw Coast Guard Sector Lake Michigan launched a crew from Coast Guard Station Manistee, Michigan, aboard a 45-foot response boat and a crews from Air Facility Muskegon, Michigan, and Air Station Traverse City, Michigan, aboard Dolphin helicopters. The Coast Guard completed a total of 11 different searches covering 76 square nautical miles. Additionally, multiple commercial vessels in the area participated in the search efforts. Forecasted weather for the search area includes a small-craft advisory in effect from 8 a.m., EDT this Sunday through Aug 24 evening with 20-25 knot winds veering west to 30 knots. Showers and thunderstorms are likely until midday and waves range from 3-5 feet.