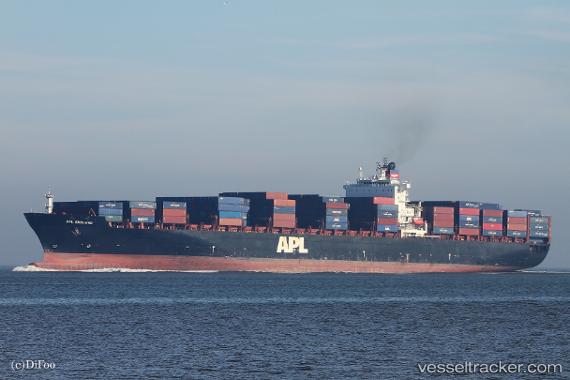 High cube containers stacked on top of each other - containers larger than standard 40-footers - were believed to have been one of the causes of the loss of 50 containers from the "APL England" in severe weather conditions near Australia in late May. The stack of high cube containers was at the very back of the ship and was so high that there was no ideal connection with the next container row, which consisted of regular containers. As a result, twistlocks could not be used everywhere to secure everything properly because of the height difference, according to a preliminary investigation report published by the Australians Transport Safety Bureau (ATSB). Also, according to the report, parts of the ship to which the containers had to be lashed, such as the lashing bridges, were not all in good condition. The ATSB found some seriously corroded attachment points though the ship had been inspected in April, a month before the accident, whereby, except for some rusty hatch coils, no major defects were reported and a DNV GL certificate was issued. The 'APL England', sailing for CMA CGM from China, was en route to Melbourne during the night of the accident and ended up in severe weather off the coast of Australia, where it had to endure force 9 winds and high waves, but that weather was according to the ATSB no worse than you can expect at that location in the Australian winter season. Nevertheless, the crew had great difficulties in keeping the ship under control and by dawn, containers turned out to be skewed and partly disappeared. In addition to the 50 boxes that fell overboard, 63 containers were damaged. After the arrival in Brisbane, the captain of the ship was detained for some time by the authorities and an investigation was started, and the first findings have now been published. The ATSB said it was is certainly not ready yet and wants to do more research into, among other things, the maintenance of the vessel, the role of the inspections and the actions of the crew.

The Australian Maritime Safety Authority (AMSA) has released the 'APL England' to allow the ship to repairs in Zhoushan with an ETA as of June 30. The ship left the Port of Brisbane in the evening of June 19 without cargo and with a new Master on board. AMSA inspectors attended the vessel during the day and were satisfied that the ship was fit to sail to China. The ship’s previous Master who was facing multiple charges relating to the incident, was repatriated home. Prior to allowing the ship to sail, the AMSA received a formal written undertaking from the ship’s insurer, Steamship Mutual, that it will pay fines and other amounts that are agreed or imposed by a court in relation to AMSA’s costs in responding to the incident. This commitment is for an amount up to $22.5 million. AMSA welcomes advice from the owners and insurer that they are in the early stages of tendering for a sonar search of about 1000 km2 of water from the Illawarra to Sydney’s southern suburbs where it was believed multiple containers may have sunk, as per the Direction issued by the AMSA.

Containership to be repaired in China

The 'APL England' has been cleared to leave Australia and will be proceeding to China for repairs on June 19. The vessel was allowed to leave the port of Brisbane after a final inspection was carried out. The owner company has promised to pay the fines and other penalties issued by the court.