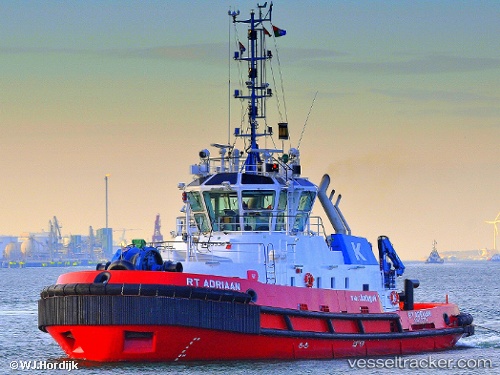 On Jan 18, 2020, the 'RT Adriaan' entered the port of Stellendam for maintenance in dry dock at Damen Maaskant Shipyards. When completed, the tugh departed under the new name 'VB Kracht' for further servicee in the Port of Rotterdam area.

KOTUG is proud to announce the proven and classified construction of Europe’s first hybrid tugboat! As from November 2011 Rotor®Tug RT Adriaan, operating in the Port of Rotterdam, has been retrofitted with a XeroPoint Hybrid Propulsion System of AKA Canada. As from March, 6th 2012, the conversion is completed and RT Adriaan rejoined the KOTUG fleet like an E-KOTUG and is optimizing its hybrid modes. E-KOTUG RT Adriaan will officially be launched in April/May 2012.

Construction of the propulsion system of Europe’s first hybrid tugboat was announced at the International Tug and Salvage Conference on 17, May 2011 in Antwerp, Belgium, by Canada-based innovatory engine designers and builders Aspin, Kemp and Associates (AKA) in partnership with Dutch tug operators KOTUG International, whose Port of Rotterdam stationed tug RT Adriaan is due to be retrofitted with AKA’s proprietary ‘XeroPoint Hybrid Propulsion System’. Harbour tugs like RT Adriaan perform a wide variety of tasks across the entire power spectrum, typically including periods of 'Stand-by for pilot’s orders', short transit passages, and then bottom-line ship berthing and un-berthing operations. Opportunities for continuous engine working at or near the high power levels that give optimum diesel engine efficiency come but rarely, indeed operational analysis has shown that tugs of this type operate at low engine loads most of the time. More at http://articles.maritimepropulsion.com/article/Green-Energy-to-Fuel-First-Hybrid-Tug-in-Europe-2096.aspx