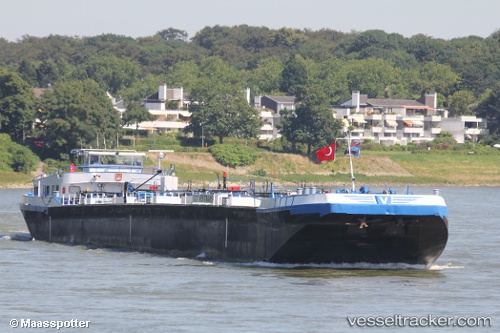 Explosion on the Rhine

On Aug 14, 2017, two large batteries aboard the "Ventrans", 2584 ts (EU-No.: 06003765), exploded on the Rhine in a distance of 500 meters of the decommissioned nuclear power plant in Mülheim-Kärlich. The explosion caused a blackout aboard the unloaded tank barge including a rudder failure. After the batteries were exchanged, the ship moved to a mooring site and dropped anchor.

Repairs at the Braun Yard were completed on June 3, and the ship berthed in Cologne on June 4.

On May 20, 2016, at 7.45 p.m. the "Ventrans", 2584 ts (EU-No.: 06003765), allided with the shore of the oil port in Karlsruhe, Rhine km 367,500, when backing out with a cargo of 2.500 tons gas oil. The ship got stuck and was torn open underneath the water line. About 2,5 tons of the cargo were spilt into the water. Another barge assisted to get off again, and it returned into the port basin. Several units of the fire rescue attended, and the barge was surrounded by oil booms. During the night hours the ship was partially lightered so that it tilted to starboard and the leak emerged above the water Surface. The ship had suffered a breach of 10-20 centimeters length, and the hull was dented. The damage was estimated to be around 250.000 Euro. The port basin was shut off with oil fences, and a Police helicopter was monitoring the site in the morning of May 21. The water police Karlsruhe launched an Investigation into the accident which was thought to have been caused by a navigational error of the master. The barge docked at the Braun Yard in the Speyer Yard Port Marina on May 23 at 1.15 p.m. for repairs after duvers had temporarily patched the breach. Repairs were expected to last until May 27. German report with photo: http://www.swr.de/landesschau-aktuell/bw/havarie-an-karlsruher-hafenausfahrt-tanker-verliert-weniger-oel-als-befuerchtet/-/id=1622/did=17470708/nid=1622/8000n6/index.html