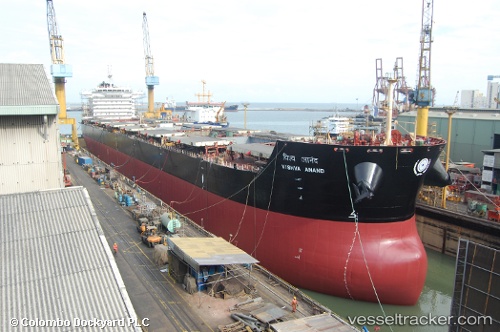 The 'Vishva Anand' which had suffered rudder damage and was towed to Durban for repairs, remained stationary at the New Pier Container Terminal as of May 7. The broken rudder will be replaced with a new one which is currently being manufactured in China.

The 'Vishva Anand' suffered rudder damage in position 27 12 47 S, 34 21 11 E, after it had sailed from Colombo, Sri Lanka, on Sep 27, was NUC on Oct 11 from 03.55 a.m. until Oct 14 at 10.40 a.m. when the navigation status switched to 'Restricted Manoeuvrability' about 70 miles off Ponta Dobela, in position 26 54 14 S, 34 09 40 E, probably indicating that the towage had started. The vessel was then moving at a slow speed under the same navigation status, until it reached the port of Durban on Oct 27 where it berthed at the New Pier Container Terminal at 8 a.m. The rudder will possibly be replaced with a new unit being manufactured as of Dec 25.

Country’s largest shipping company, the Shipping Corporation of India Ltd. (SCI) accepted delivery of a Panamax Bulk carrier, m.v. Vishva Anand on Friday 20th July, 2012. The vessel is the first vessel of the four Panamax bulk carriers ordered by SCI with STX (Dalian) Shipbuilding Co. Ltd., China. Order for the Panamax Bulk carriers was placed in August 2008. These vessels were ordered as part replacement of SCI’s Daewoo series Handymax bulk carriers which were built in 1986/87. These vessels are of higher capacity in the Panamax size range of above 80,000 DWT each, compared to the conventional Panamax vessels of 75,000 dwt. Also on order are four Kamsarmax Bulk Carriers. “m.v. Vishva Anand” has a gross tonnage of 44,007 tonnes and deadweight of 80,204 tonnes. The vessel has been classed with LR and IRS and has been built to comply with the latest and most stringent international regulations. http://www.maritimeprofessional.com/Blogs/SCI-takes-delivery-of-Panamax-Bulk-carrier/July-2012/SCI-takes-delivery-of-Panamax-Bulk-carrier.aspx