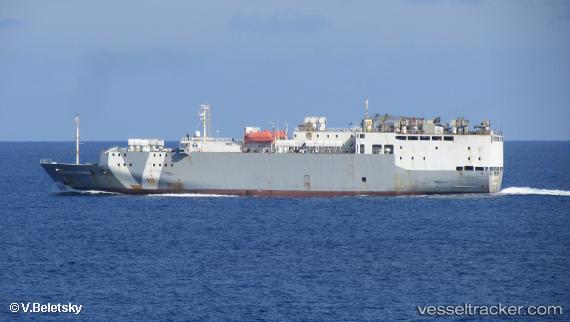 After the discharge of about 5,000 liters of fuel at the Alfau Pier in Ceuta, the the Dutch company Livestock Express BV company as owners of the 'Holstein Express' has made the payment of 370.000 Euros that the Maritime Captaincy had imposed for the release at the General Deposit Box on Jan 14 at 3:00 p.m. The ship had spilled between 4,000 and 5,000 liters of 0.5% sulfur-low Fueloil VLSFO (Very Low Sulfur Fueloil) whereupon two bonds were imposed by the Maritime Captaincy. The spill was caused by a human error as confirmed by the Maritime Captaincy, during the fuel supply operation and when the ship only lacked about 7 tons to complete the operation. The costs of cleaning and removal of the fuel spill has risen to 120,000 Euros. To guarantee the collection of the sanctions that may be imposed another bond amounting to 250,000 Euros gave sufficient guarantees to the Maritime Administration until the completion of the file and the imposition of the fine that can amount to 600,000 Euros. The cleaning work continued on the Alfau Pier. The 'Holstein Express' left the port on Jan 14 at 6 p.m., headed to Sines with an ETA as of Jan 15. Spanish report with photo: https://elforodeceuta.es/capitania-libera-buque-contaminante-holstein-pago-370000-euros-fianza/

The Harbour Master of Ceuta, Jesús Fernández Lera, met on Jan 11 with the inspectors of the Maritime Captaincy, as well as with the lawyers of the captain of the 'Holstein Express', the shipowners and the 'P&I' and gave them the documentation with the precautionary measures adopted after the discharge of approximately five tons of fuel oil while the vessel carried out the refueling operations on the Alfau Dock. Once the bail bonds have been paid, the ship could leave the port of Ceuta, something that will not occur until Jan 13, when the payment of the bonds will be made effective. Fernández Lera confirmed that, in addition to the bail of 250,000 Euros, an economic sanction was imposed on the vessel for the discharge in an amount of 120,000 Euros for the expenses generated by the cleaning work of the entire area of ​​the dock affected by the spill of the fuel oil. A total of 370,000 euros of deposit was expected to be deposited on Jan 13. This bond is required from the ship's captain, the shipowner who operates the ship, the ship owner and the ‘P&I’ or the company that has civil liability insurance. The oil removal was going on at a very good pace and so that this area of ​​the port could resumed its activity soon. The 'Holstein Express' changed berth once the hull cleaning work was completed to allow cleaning the area. The Alfau quay will be cleaned gradually but that this will not pose any obstacle for the port to resume its activity on Jan 13. The spill was caused by a human failure as the safety management system of the ship was not fulfilled during the refueling work, so that an overflow of one of the fuel tanks occurred.

The 'Holstein Express' caused a fuel spill in Ceuta, affecting the Levante pier, the boathouse and the fishing port. About four tons of fuel leaked from the vessel on Jan 10, 2020, at 4 a.m. at the Alfau dock. The Port Authority activated the anti-pollution protocol. Ecoceuta workers were called to remove the oil both from the dike and on the water. They dropped absorbent towels and removed those already soaked with fuel. Operations at the east dike, the Alfau dock and varadero were suspended. A 150 meter long anti-pollution barrier has been laid out. During the next few hours, workers continued with the cleaning of the water, the ship's side and quayside docks. The accident happened when the 'Holstein Express' was bunkering fuel and one of the tanks overflowed and caused the discharge. The incident was generated by improper handling of the on-board valves during the supply operation. An investigation will determine if it was a negligence on the part of the crew, which ignored the amount of fuel that remained in the tank, or if it was a technical failure of the meter, which did not indicate the remaining fuel that was still inside the tank. Inspectors of the Maritime Captaincy went on board the ship to try to clarify what happened and thus establish the corresponding sanction. Spanish reports with photos and video: https://elpueblodeceuta.es/art/44165/detenido-un-buque-de-luxemburgo-por-el-vertido-de-fuel-oil-en-el-muelle-alfau https://elfarodeceuta.es/barco-vertido-toneladas-fuel-oil/