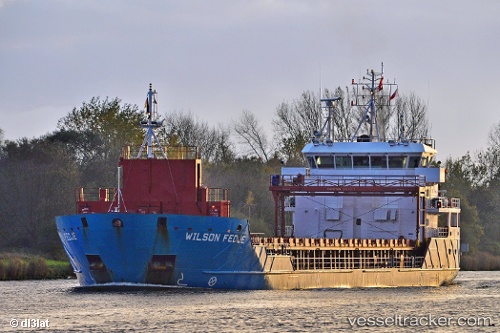 Enroute from Bromborough to Kirkwallthe " Wilson Fedje" on May 3, 2014, experienced mechanical problems west of Orkney. On May 4 the ship has been pulled to safety to Kirkwall Harbour after a 18 hour tow. The Shetland Coastguard was contacted by the crew of the ship around 8 a.m. A sister ship, the "Wilson Cane", initially stood by the ship, which was in a position approximately 18 miles north north east of Cape Wrath. A private tow was then arranged, as it became apparent that the problem could not be fixed at sea. The Orkney based tug "C-Odyssey" took the vessel under tow, arriving in Kirkwall at 6 p.m. The ship was also assisted by other vessels, including the Orkney based tug "Einar", the "C-Salvor" and the pilot boat Kirkwall Bay. Report with photo: http://www.orcadian.co.uk/2014/05/freight-ship-towed-to-kirkwall/

Collision thought to have been caused by human error

The soy aboard the German flagged, self propelled barge “Jade”, 1408 ts (EU-No.: 04012840), which was grounded on the northern Elbe shore following the collision with the “Wilson Fedje” was to be lightered by a dredger ship on Mar 6. Then the breach was to be welded with a large steel plate so that the vessel could be floated off and pulled to the Jöhnk Yard in Hamburg-Harburg. The damage was estimated to be at least around 500000 Euro. Regarding the "Wilson Fedje", the prosecutor launched an investigation against the pilot and the master. According to the police the accident happened because of human error. It was thought the "Wilson Fedje" was much too far in the northern fairway. The master had to pay a safety deposit of 8000 Euro. The vessel was due to leave Hamburg bound for Herøya in the evening of Mar 6. German reports with photos: http://www.kn-online.de/Schleswig-Holstein/Aus-dem-Land/Havarie-im-Hamburger-Hafen-Binnenschiffer-Jade-auf-Strand-aufgelaufen-Strafverfahren-eingeleitet http://www.mopo.de/nachrichten/frachter-rammt-binnenschiff-othmarschen--so-landete-kaept-n-kazi-auf-dem-strand,5067140,26482184.html

In the morning of Mar 5, 2014, the German barge “Jade”, 1408 ts (EU-No.: 04012840), was in collision with the “Wilson Fedje” on the Elbe off Othmarschen/Nienstedten. The „Jade“ was underway with a cargo of 1000 tons soy and bran, the „Wilson Fedje“ had come from the Werwe Port in Rotterdam where it had sailed on Mar 4 at 2 a.m. and was bound to Hamburg. The cargo ship struck the barge at port side which was torn open. The sinking barge could be beached at the Northern river shore off Teufelsbrück where it was secured by the police launch "WS 35". Part of the grain cargo was spilt into the water. The fire rescue attended with divers, also anti pollution teams and the police were on scene. No one was injured in the accident which seems to have been caused by dense fog. The „Wilson Fedje“, which had only suffered scratches, continued to the Kali Quay where it docked around 8 a.m. German reports with photos: http://www.shz.de/hamburg/meldungen/schiffe-stossen-im-hamburger-hafen-zusammen-id5913516.html# http://www.express.de/panorama/unglueck-in-hamburg-nebelcrash--zwei-schiffe-auf-der-elbe-kollidiert,2192,26472472.html http://www.ndr.de/regional/hamburg/schiffskollision167.html http://www.wochenblatt.de/nachrichten/welt/Frachter-rammt-Binnenschiff-im-Hamburger-Hafen;art29,231342 http://www.elbdampfer-hamburg.de/forum/viewtopic.php?p=8508#p8508 http://www.spiegel.de/panorama/schiffsunfall-im-hamburger-hafen-a-957099.html