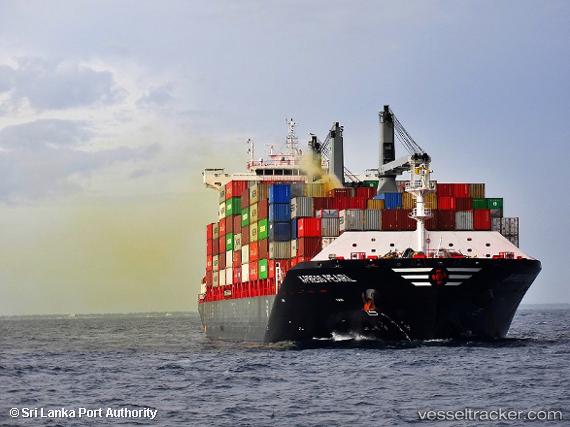 The Attorney General has informed the Colombo High Court on Sep 21, that the investigations regarding the fire that destroyed the ‘X-Press Pearl’ near Colombo port, were still ongoing. The case was called before Colombo High Court Judge Damith Thotawatta. The state counsel who appeared on behalf of the Attorney General informed the court that the investigations related to the case are presently at the final stage. The Attorney General also requested for a date for presenting facts before the court, once the investigations are completed. Colombo High Court Judge Damith Thotawatta, who considered the request ordered for the case to be taken up on Nov 23. The Russian captain of the X-Press Pearl ship and the four Directors of the vessel’s local shipping agency representing the X-Press Pearl, were named as the suspects in the case.

Wreck removal to resume in November

The Shanghai Salvage Company will resume the wreck removal of the 'X Press Pearl' at the end of the high tide by November. The insurer of the ship has paid US$ 3.6 million in several tranches so far for the expenses incurred by the Government institutions in handling the maritime disaster. In addition, the Fisheries Ministry had received about US$ 4.4 million in three parts as compensation to fishermen since there was a fishing ban in the affected sea area for several days. This included US$ 2.5 million received late in August. The Fisheries Ministry will distribute the money among the 15,032 affected fishermen. Sri Lanka has yet to submit its environmental damage claims, and Australian law firm Sparke Helmore Lawyers is providing legal guidance to Sri Lanka. There has been no respite from beach clean-up activities as tiny plastic pellets and other debris from the burnt ship wash ashore every day.

The Marine Environment Protection Authority (MEPA) Chairperson Dharshani Lahandapura has received Rs. 1.3 billion by the Treasury to clean beach by removing the plastic and waste released from the 'X-Press Pearl'. This money has been given by the company which insured the ship. The first interim report which has calculated and assessed the environmental damage caused to the coast due to the ship that sunk in Sri Lankan waters on May 20, 2021, has been sent to the Australian law firm specializing in ship accident compensation. After receiving the instructions from that institution, further legal steps will be taken together with the Attorney General’s Department. Due to the damage to the ship, fishing from Panadura to Negombo (Ma Oya) was suspended and the area declared a no-go zone. Work to remove sections of the 'X-Press Pearl' is due to resume later this year after the current monsoon season. Starting late last year, loose debris was being removed while a survey was completed of the seafloor and the first stage of the wreck removal began. The salvage team reported the vessel has cracked midships, which resulted in a change to the salvage plan. They were attaching lifting wires under the hull earlier this year and working to remove the accommodation block. The next phase of the salvage project will focus on splitting the wreck entirely into two sections and preparing for the lifting of each section. The goal is to lift the wreck with a lifting barge for removal in early 2023. The sections, cargo remaining aboard, and any other cargo and debris will be recovered from the bottom with a goal of completing the project by September 2023. The owners of the ship, X-Press Feeders, contracted with Shanghai Salvage Company for the removal of the wreck, and all the debris will be properly treated and recycled.