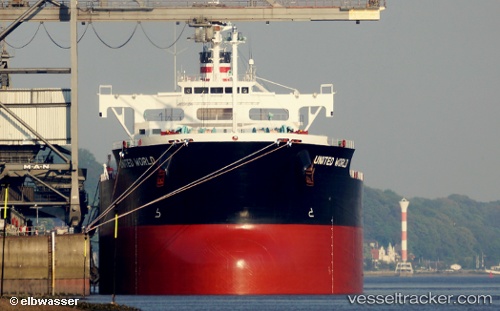 The "Peak Pegasus", carrying soybeans from the United States docked in the port of Dalian on Aug 11, more than a month after it arrived off China’s coast just hours after hefty tariffs were imposed on US goods. The short journey into the port was the first by the "Peak Pegasus", which had 70,000 tonnes of US soybeans on board, since it arrived off the coast on July 6 soon after Beijing imposed 25 per cent import duties on US$34 billion worth of US goods, including soybeans. The penalties were in response to a similar move by Washington as part of a tit-for-tat trade dispute between the world’s two largest economies. The ship was moored in the port area just after midnight.

A shipment of soya beans worth more than $20m has been bobbing aimlessly in the Pacific Ocean for a month aboard the "Peak Pegasus", a casualty of the escalating trade war between China and the US. The bulk carrier was scheduled to unload about 70,000 tonnes of American soya beans in the Chinese port of Dalian on July 6, 2018, shortly after Donald Trump imposed a first round of tariffs on $34bn-worth of goods. As it rushed to shore in the hope of clearing customs before Beijing imposed retaliatory tariffs, the ship – and its protein-rich cargo – became an unlikely internet sensation on the Chinese social media platform Weibo. However, the vessel arrived just too late and has been sailing around in circles ever since while the cargo’s owners, understood to be the agricultural commodity trading house Louis Dreyfus, decide what to do.

BEIJING, May 3 (Reuters) – A vessel carrying 58,503 tonnes of sorghum from the United States switched its destination from China to South Korea early on Thursday, according to Thomson Reuters Eikon ship tracking data. The Peak Pegasus loaded U.S. sorghum from trader ADM’s Corpus Christi grain elevator in Texas and departed on April 3 for Nansha in southern China, according to U.S. Department of Agriculture data. It is now due to arrive in Gunsan in South Korea on May 10, according to the data.