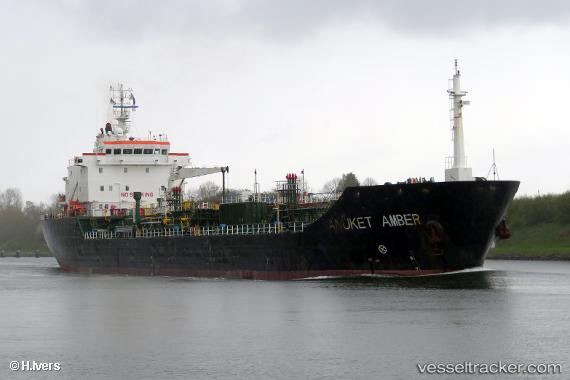 According to a report, dated Jan 5, 2019, two Ukrainian sailors, who were crew members of the "Anuket Amber" and the AHTS "Ark Tze" were released by pirates, who had been abducted by pirates on Oct 29, 2018, off Pointe Noire, Congo. This information was officially confirmed by the Ukrainian Minister of Foreign Affairs. It was expected that the released crew members will be repatriated in the coming days.

On Nov 2 the "Anuket Amber" was released and sailing in northwest direction south of Lome, Togo, in the Gulf of Guinea with armed guards on board. The crew was understood to be safe and well. Most probably, the tanker was released after pirates siphoned the cargo of fuel.

Two ships were attacked by pirates west of Pointe Noire, Congo, on Oct 29, 2018, around 1 p.m.. The "Anuket Amber" was bunkering the LPG tanker "BW Frigg (IMO: 9733337), when pirates attacked both ships in pos. 04 47S 010 07E, west of Pointe Noire. The "BW Frigg" managed to escape, the "Anuket Amber" was hijacked. The connection with the ship was lost, and the manager and other involved parties were taking all necessary measures.