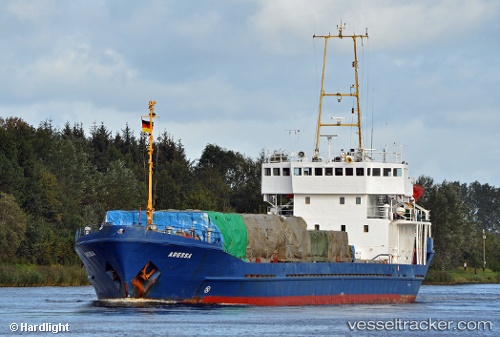 The "Aressa" has been seized after the Danish Maritime Authority found no less than 37 faults and deficiencies on board the ship during a port state control at the Prøvestenen in Copenhagen on Sep 11, 2019. The living conditions on board were poor. Crew members have not been paid, and there was absolutely clutter in the salary accounts with doubts about what they have been given and whether they have been paid. Nine of the crew were from Russia and two from Belarus. There was no heat and the supply - which is deficient - did not meet the requirement for a healthy and varied cooking. As far as security was concerned, there were 33 faults and shortcomings including faulty fire equipment and charts that were more than two years old a.o. It was the third time in the past year that the ship has been detained, and it is thus faced with prohibited access to ports in Europe. In November 2018, the "Aressa" spent four days detained in Azov for defects in lifeboats and fire extinguishing equipment a.o. The ship was released by the Russian authorities on condition that it sailed to a shipyard for repairs. It was, however, uncertain whether this did take place. O Jann 23, 2019, Port State inspectors at Goole found 24 failures and defects. 13 of the deficiencies were so severe that they each provided reasons for detention. Here too, the inspectors found defects and deficiencies in rescue equipment, missing certificates and defective contracts a.o. The 'Aressa' was detained in Goole for 1,5 months and was allowed on March 12 to sail after the presentation of a documented agreement with a shipyard for repair work. When the Danish Maritime Authority now found several violations of the Maritime Labor Convention, ITF Denmark was informed. ITF Inspector Morten Bach on Sep 12 offered the crew his assistance in connection with the salary payments, etc. but was thrown off the shipp by the Russian captain, who in no case needed help. It was his clear impression that the crew was suppressed and afraid of the consequences of contacting someone. The captain maintained that the shipping company had ordered supplies and that it would come on board soon. The ITF followed up and checked that supplies and water were coming on board. With the prospect of a likely long-term detention of the ship, its condition taken into account, there is a risk that the shipping company will just abandon ship and crew. The ship left the port again on Oct 2 at 3.50 p.m., headed to Lomonosov with an ETA as of Oct 7.

Date and Place of Detention: 23rd January 2019 at Goole Summary: Twenty Three deficiencies with thirteen grounds for detention This vessel was still detained on 28th February 2019

General cargo vessel Aressa ran aground on 1923.5 kilometer mark on river Volga on July 12, en route from Ulyanovsk to Rostov-on-Don with 1544 tons of scrap on board. No other information available, vessel presumably as of morning July 18 was still aground. Source: news.odin.tc