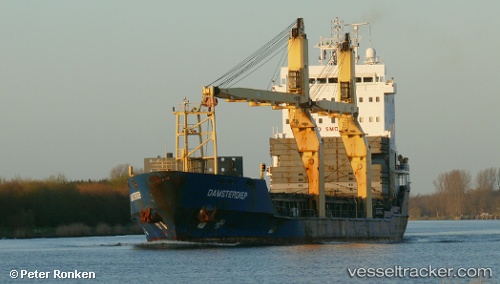 Seized freighter to be auctioned

the Antwerp Port Authority was now going to auction the 'Basel Express' which was detained with many breaches of safety rules, moldy food on board and staff having been not paid correctly after its arrival on Antwerp on March 11, 2019. The crew has already left for a while, but theship remained in the 5th Harbour Dock. There will be a public sale with no date having been fixed yet. Experts suspected that the ship would be scrapped because making the vessel seaworthy again would be too expensive. With the money generated by the sale, creditors, primarily the crew, can be paid.

On June 14 the last crew member left the "Basel Express" almost three mothns after its detention in Antwerp after entering port on March 21. He was to be repatriated. Legionella on board, decaying food were no fun during the recent months for the remaining crew. When the ship will be gone, however, was unclear. When it arrived in port, it had about 30 technical defects, but also hygiene breaches and was detained by inspectors.

The "Basel Express" has been detained upon its arrival in the port of Antwerp. Multiple problems on board led to inspections, during which 30 defiencies were found regarding technical defects, but also hygiene breaches. The living conditions also turned out to be bad, with decaying food on board. The crew had no fresh vegetables or fruit. There is only frozen food on board but also the freezers were broken. Now the sailors get food from another ship that has been detained in the port of Antwerp and the crew of which has been allowed to leave. The Syrian captain has disappeared without a trace. The ship had arrived in the Albert Dock on March 21, coming from Gibraltar with about 20 crew members, among them Syrians, Egyptians and Indians. It seemed that hey had not been paid, but reliable documents were missing. The Maritime Police has withheld the crew's passports and the sailor's booklets. They must remain on board. The Immigration Office is also involved. Presumably they will be forced to repatriate. Dutch report with photo: https://www.hln.be/regio/antwerpen/schip-aan-de-ketting-in-antwerpse-haven-er-stond-schimmel-op-het-eten~ac5b6004/ https://www.vrt.be/vrtnws/nl/2019/03/29/beschimmeld-eten-en-slechte-hygiene-wantoestanden-op-schip-in/