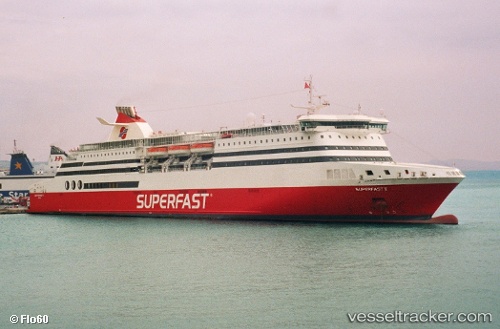 On July 29, 2019, the "Cap Finistère" assisted the crew of the distressed yacht "Hiva Oa". The ship had issued a distress call at 6:53 p.m. which was received by the CROSS Étel. The yacht with a length of 10 meters was 105 miles south of Brest, and the ferry 15 miles north of the beacon position. Shortly afte 8 p.m. the "Cap Finistère" established a radio contact with the sailboat in distress, which confirmed to have capsied and was dismasted with a crew off four on board, one of whom was injured. The weather conditions were very bad with 50 knots of wind and a swell of six meters height. A Cayman helicopter of the Navy base in Lanvéoc-Poulmic took off at 8:17 p.m. with a medical team on board. At 8:35 pm, Cap Finistère locates the sailboat in distress. Its precise position was then transmitted to the helicopter crew, who arrived at 9:10 p.m. and hoisted the yacht crew. They were taken to the hospital Cavale Blanche in Brest where they arrived at 1.05 p.m. French report with photo: https://www.premar-atlantique.gouv.fr/communiques-presse/operation-de-sauvetage-de-l-equipage-d-un-voilier-en-detresse-dans-le-golfe-de-gascogne-200-km-au-sud-de-brest

On May 19, 2019, at 2.15 p.m. the CROSS Jobourg was alerted that a 73-year-old British woman, passenger on board the "Cap Finistère" sailing on the route Santander - Portsmouth, complained of chest pain. The CROSS Jobourg in conjunction with the Toulouse Medical Center for Consultation (CCMM) and the Maritime Medical Coordination SAMU in Le Havre recommended that the patient was to be medevaced as soon as possible. The CROSS Jobourg deployed a Cayman helicopter of the Navy base in Maupertus After recovering a medical team in Querqueville the helicopter headed towards the ship, which was 38 miles west of Guernsey. At 4 p.m., after being conditioned by the medical team on board the ship, the woman was hoisted and taken to the port of Chantereyne Cherbourg-en-Cotentin and then taken to the Pasteur Hospital.