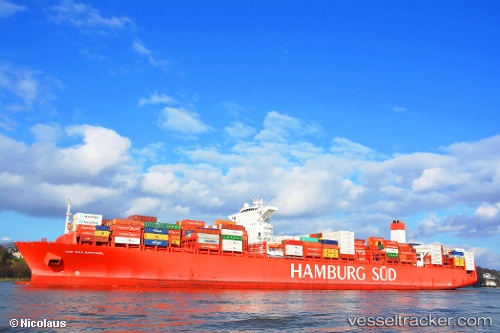 Record fog is delaying shipments at South America’s busiest port of Santos, Brazil, adding to other woes shippers are coping with, including from customs slowdowns and a recurring labor dispute between terminal operators and dockworkers. The Santos entrance channel was closed on Monday beginning at 2:45 a.m. EST and only reopened at 1:30 p.m. EST, delaying 11 ships, including four container ships, according to Codesp, the port authority for Santos. Two of the four delayed container ships were the Hamburg Sud vessels CAP San Raphael, with a capacity of 9,814 twenty-foot-equivalent units, and the Fernão de Magalhães, with a capacity of 3,765 TEUs. Their departures were delayed from the Santos Brasil-operated Tecon Santos terminal by between seven and nine hours.

On Friday, June 27, Hamburg Süd christened its new container ship “Cap San Raphael” in the presence of 700 guests at the Burchardkai Terminal in the Port of Hamburg. The ship’s Sponsor is Ingeborg Schäuble, former Chair of the German Welthungerhilfe and wife of the German Finance Minister, Dr. Wolfgang Schäuble. Other participants in the ceremony included Dr. h. c. August Oetker, Chairman of the Advisory Board of the Oetker Group, and Hamburg Senator for Economic Affairs, Frank Horch. The “Cap San Raphael” is one of six new container ships built for Hamburg Süd by the Korean shipyard Hyundai Heavy Industries in Ulsan. She is currently – like her sister ships – deployed in the liner service between Europe and the East Coast of South America. The newbuilds in the Cap San class, with their nominal slot capacity of 9,600 TEU are the biggest ships in the shipping group. With 2,100 reefer slots, they have the largest reefer capacity worldwide and highlights Hamburg Süd‘s capacity in one of its core competences: transportation of refrigerated goods.