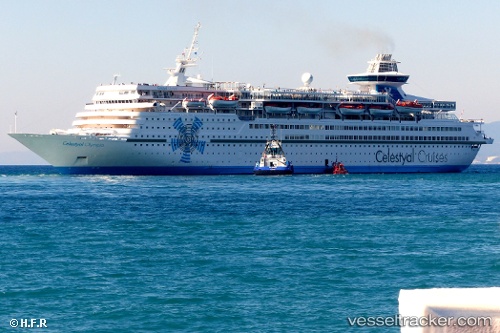 The Piraeus Port Authority was informed on Feb 22, 2019, at midday hours today, that a 28-year-old crew member of the "Celestyal Olympia" was in need of immediate hospital care. The ship was outside the port of Piraeus, where the patient was medevaced by the "Roussis II" and taken to the Xavier Pier and was then transported by an ambulance to a private hospital.

On Oct 24, 2018, a helicopter medevaced an 81 year old passenger of the "Celesyal Olympia" west of Rhodes. The Super Puma of the Greek Air Force hoisted the patient who needed immediate hospital care and transferred him to the heliport of the General Hospital of Rhodes.

The first cruise ship carrying a group of Chinese tourists to the Aegean Sea islands set sail from Greece's Piraeus port Friday after a celebratory event. It is the first time ever a group of more than 200 Chinese passengers boarded a Celestyal Cruises ship at Piraeus, Greece's largest port, for a four-day cruise in the Aegean Sea. The ship will dock at Mykonos, Kusadasi, Samos island, Patmos, Herakleion port city on Crete island and Santorini before returning to Piraeus next week. "I am very excited to hear that we become the first group to come to this port. I think I will enjoy this trip; And of course I think when I come back I will introduce it to my friends," Chinese tourist Xiao Yu who is about to board the ship told Xinhua. Chinese shipping giant China COSCO Shipping, which took over the management of Piraeus Port Authority (PPA) last year, aims to bring more Chinese tourists to Piraeus and the Greek islands in coming years, PPA CEO Fu Chengqiu said while addressing the celebratory event. "We want to become a bridge linking Chinese tourists to Greece, and welcome more and more Chinese visitors who will enjoy cruise vacations here in Greece with quality service," Fu said. Fu said they would like to work together with the Greek government and partners to embrace more tourists from China and other countries worldwide in a bid to triple the overall one million tourists Piraeus port currently handles per year to 3 million in the long term. http://www.globaltimes.cn/content/1043618.shtml