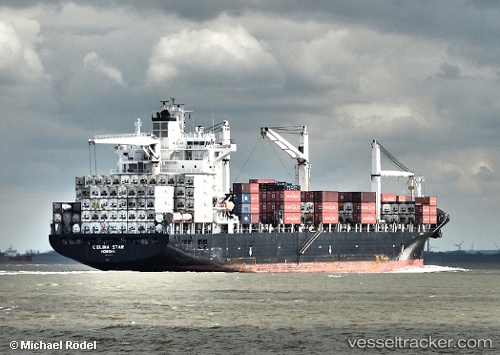 208 packages of drugs were found on board the "Celina STar" at Colon, on May 4, 2018. The packages were hidden in the ventilation system. The had ship transited the Panama Canal en route from Buenaventura to Algeciras . Official statements didn’t mention crew involvement. The vessel left Manzanilla on May 5, ETA Algeciras May 15.

The "Celina Star" after her collision with the Liberian tank m/v "UACC Shams" (IMO: 9428360), in the Bay of Algeciras on Nov 20, left the port of Piräus after repairs on Dec 21 and headed to Tanger-Med as next port of call, ETA Dec 26.

In the early morning of Nov 20, 2016, the tanker "UACC Shams", heading from El Ferrol to Algeciras, collided with the "Celina Star" which was leaving the port bound to Livorno, in the Bay of Algeciras. The accident took place off the beach of Getares. Both vessels suffered damage, but anchored safely in Spanish waters. There were no reports of serious damage to either vessel, nor risk of fuel spillage. The tanker had a dented bulwark at the portside foreship, the boxship dents and bruises at the starboard side aft, both well above the water line. The Port Authority was in communication with its Algeciras counterpart throughout the operations. Both ships were remaining moored off Algericas for the time being. The collision was investigated by the Investigation Commission for Incidents and Incidents (Ciaim) of the Ministry of Public Works. Photos: https://pbs.twimg.com/media/Cx2j-lEXcAQFzIs.jpg https://pbs.twimg.com/media/Cx2kAyzW8AAvzNn.jpg