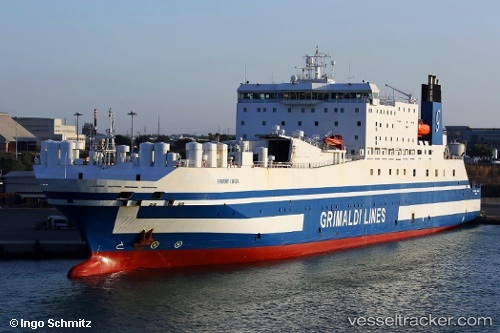 Engine breakdown, while en route from Salerno to Catania

Passenger ro/ro Euroferry Egnazia (33588 gt, built 1994) experienced an engine breakdown, while en route from Salerno to Catania, on July 2. The crew managed to conduct repairs while off the coast of Calabria and successfully started the engines. The vessel has resumed its passage to Catania.

Upon the arrival in the port of Brindisi on March 25, 2018, the "Euroferry Egnazia" was damaged during the mooring manoever. The 125 passengers, 21 trucks and 75 vehicles were disembarked in Igoumetsia. After the port authority was informed, the ship was prohibited to sail until the damage has been repaired and the seaworthiness certified.

In the morning of Oct 11, 2015, at 4.30 a.m. a ramp of the "Euroferry Egnazia" crashed down into the water in the port of Igoumenitsa after the hydraulic system failed. Nobody was injured, but the ramp was inoperable and not watertight when being raised. The ship berthed alongside the quay between the ramps No. 2 and 5, and passengers who were destined for Igoumenitsa went ashore after a ladder was rigged, but 301 passengers bound for Patras stayed on board. On Oct 11 the raising efforts with a crane were to no avail, so the vehicles had to remain aboard the ship. On Oct 12 at 2 a.m. the crew of the ferry, with the assistance of large crane vehicles, placed the necessary pin at the top of the port side hydraulic lifting system so that it was functioning normally again. Then the "Euroferry Egnazia" changed the berth and moved to mooring ramp No. 4, where 64 passengers, four cars , 64 trucks and three trailers that were bound for the port of Patras could leave the ship after 22 hours and shifted onto the cruise ferry "Euroferry Olympia" which sailed at 04.27 a.m. The Central Port Igoumenitsa has detained the "Euroferry Egnazia" until an inspection was carried out and the seaworthyness certificated. Report with photo: http://www.tovima.gr/society/article/?aid=745235