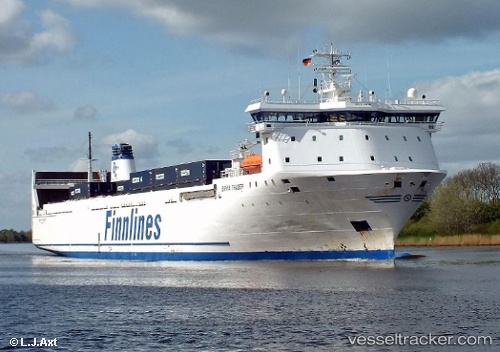 Ferry under tow to Frederikshavn

The "Finnmaster" has suffered an engine malfunction on its voyage from Hull to Helsinki which started on Sep 8, 2019, at 10.20 p.m. The vessel stopped for repair activities, and the operator estimated an initial delay of abt 48 hours. The crew, the vessel and all cargo on board have been reported safe and without damages. The repair activities were facilitated by the good weather forecast. The "Finnmaster" was initially expected in Helsinki on Sep 13 at 3:30 p.m. On Sep 11, however, the tug "Pegasus" (IMO: 9433743) which was called from Rotterdam on Sep 10 at 32.40 a.m., had taken the ship in tow to Frederikshavn. The casualty was moored off Frederikshavn on Sep 12 at 8.40 a.m. in pos. 57° 26.00' N 010° 33.64' E. On Sep 15 the ship has left the mooing off Frederikshavn and headed to Vuosaari, ETA Sep 16 at noon. The "Finnsky", loading from Helsinki to Tilbury on Sep 11, could be used as backup in case any urgent cargo needed to be re-routed.

In the afternoon of Aug 31, 2017, the "Finnmaster" encountered technical problems after having left the port of Naantali at 10.30 a.m. bound to Oxelosund. The vessel was heading towards the island of Haplot north of Innamo following a rudder damage, but the crew managed to stop the ship on time, and none of the four passengers or 15 crew members were in danger. She dropped anchor in the Innamo Sund Strait, southwest of Turku, in the Åboland archipelago. The Finnish patrol boat "Tursas" (IMO: 1048576) was on site in the evening. A diver surveyed the rudder in the night hours. The crew managed to fix the problem, but the vessel was ordered to sail to Turku for further inspections and repairs in case needed. The ferry heaved anchor at 3 a.m. and berthed in Turku at 4.45 a.m. She left the port again after inspection and repairs inon Sep 1 at 8.30 p.m., bound to Travemünde, ETA Sep 3. Finnish report with photo: http://m.iltalehti.fi/kotimaa/201708312200364153_u0.shtml