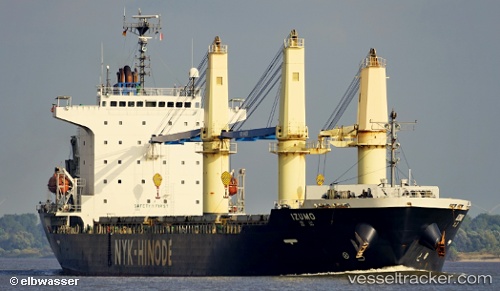 The fire aboard the 'Izumo', which was carrying a cargo of steel coils, belts and other goods, was brought under control on the outer anchorage of Chittagong, using the port's own fire trucks and the tug 'Kandari 7' and 'Kandari 12' on July 2. The ship had arrived from Shanghai on June 28. The ship remained moored in pos. 22° 8.75' N 091° 47.07' E on July 3.

The 'Izumo' caught fire at Chittagong in the afternoon of July 1, 2020. The ship berthed at around 03.45 a.m. Several fire engines and a tug were deployed in firefighting. The vessel unmoored at 1 p.m. and sailed downstream under own power, left port area with the fire still on and dropped anchor at 5 p.m. It had arrived from Shanghai with cargo of construction materials on board. The ship would be allowed to return only after fire has been extinguished.

An understanding on compensation has been reached between representatives of the "Izumo" and various unions in connection with the hit-and-run case off the Kozhikode coast on Jan 16. As per the agreement reached at a meeting at the office of former state industries minister Elamaram Kareem in Kozhikode on Jan 24, the owners of the ship will pay a compensation of Rs. 19.5 lakh to the three fishermen who had a miraculous escape after the ship rammed their fishing vessel "Al Ameen". The fishermen, who had lodged a complaint with coastal police station at nearby Beypore against NYK Hinode Line Ltd, Tokyo, the owners of the vessel, would withdraw it, as per the deal.