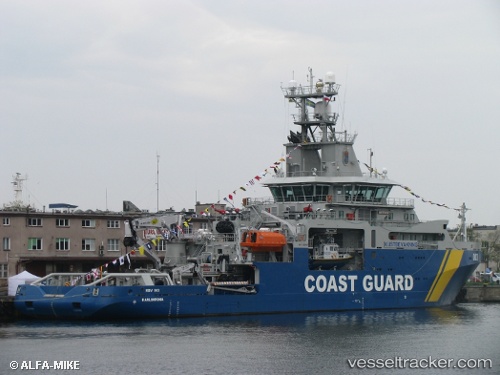 Since the afternoon of Sep 27, the 'KBV 003-Amfitrite' has been in the position of the two leaks in the Swedish economic zone. The crew reported that the gas flow seen on the surface was constant. On board, they have two main tasks: - Monitor the discharge to see if it decreases or increases - Assist shipping to secure maritime traffic The Swedish Coast Guard strengthensedthe capability on board the ships with rescue divers. Their task is to assist potential accident victims, not to work with the leak itself. A preliminary investigation is led by prosecutors. The police authority was investigating and has requested assistance from the Coast Guard for such measures where the Coast Guard's skills, equipment and resources can be used to move the investigation forward. The Coast Guard is also in close contact with other relevant authorities, in Sweden and abroad. Contact has been established with representatives of Nord Stream.

The gas leak from the Nord Stream gas pipeline measures over 950 meters in diameter. Two of the reported leaks from the Nord Stream gas pipeline are located in the Swedish economic zone. The Swedish Coast Guard was keeping resources in readiness and followed developments in close contact with other authorities in Sweden and abroad. Based on the current situation, it is not possible to limit or combat the release, but the gas dissolves little by little into both the water and the air. Given that the gas dissolves relatively quickly, the concentration and thus also the risks are reduced. The release itself is visible on the sea surface as a bubbling underwater plume and amounts to approx. 900 meters in diameter. An environmental rescue operation has been started and the 'KBV 003 Amfitrite' will be in close proximity to the area and our aircraft is continuously patrolling the position. The measures taken by, among other things, the Swedish Maritime Administration are to issue navigational warnings to ships to keep a safe distance of five nautical miles from the areas. The focus is to have a visual control over the release itself and assist shipping by following the navigational warnings, not getting too close to the spill and have a preparedness for a worsening situation. In parallel with this, the Police Authority is assisted in their investigation. As of Sep 28, the patrol boat was in pos. 55° 37.76' N 015° 54.18' E, joined by the patrol boat 'KBV 302' (MMSI: 265388000). The Swedish Maritime Administration has sent out navigational warnings on Navtext and VHF that ships should stay away from the area. Vessels are requested to maintain a safety distance of 5 nautical miles from the sites. Report with photo: https://www.kustbevakningen.se/fler-nyheter/kustbevakningens-roll-i-anslutning-till-de-lackande-gasledningarna/

The Swedish Coast Guard deployed the 'Amfitrite' on Sep 27, 2022, out to one of the leaks discovered on the Russian gas pipelines Nord Stream 1 and 2 in the Baltic Sea after explosions were noticed late on Sep 26. It was expected to arrive in the late afternoon to make sure that maritime traffic follows the instructions that have been issued, and on the other hand, keep an eye on the gas discharge and that it stays at the same level as until now. The ship has the ability to enter a contaminated environment and into a gas cloud, but it entails risks. Reports with photo and videos: https://sverigesradio.se/artikel/kustbevakningen-rycker-ut-till-gaslackan-fartyget-klarar-att-ga-in-i-ett-gasmoln--2 https://www.forsvaret.dk/da/nyheder/2022/gaslakage-i-ostersoen/ https://www.tagesschau.de/wirtschaft/nord-stream-lecks-gefahren-101.html