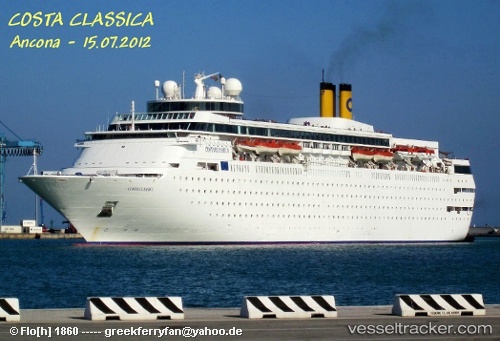 No sail order for defiencies

A 'No Sail Order' was issued for the Bahamas flagged cruise ship 'Margaritaville at Sea Paradise', which was docked at the port of Palm Beach and was supposed to head to the Bahamas on July 13, 2022. The ship remained docked in Riviera Beach on July 14. The Coast Guard issued the "No Sail Order" due to the following: "Cruise ships operating in the U.S. are required under federal law to have a Certificate of Compliance exam every 6 months. During this ship’s annual exam, Port State Control officers identified conditions, which required the ship to stay in port until rectified due to the safety of the crew and passengers. The ship will not sail until the conditions are rectified." After this was done, the ship was cleared for sailing during the morning hours of July 15.

The rebranding of Bahamas Paradise Cruise Line into the Margaritaville at Sea has been delayed, with multiple cruises canceled as the line has pushed back the inaugural sailing of its rebranded flagship 'Grand Classica'. The new line is now scheduled to debut on May 14, 2022. The new cruise line was scheduled to debut on April 30, 2022, but the first voyage of the updated and renovated ship will now be May 14. Guests booked on the impacted sailings received an email with the news, citing that the delay is a result of supply chain issues. Impacted guests have reached out to the cruise line’s customer service about the canceled sailings, and have reported that refunds will be offered or cabins can be rebooked to later sailings. Details of those options were not immediately available, and guests should contact the cruise line’s customer service or their travel agent, if they used one, to confirm and make appropriate arrangements. The Florida-based Bahamas Paradise Cruise Line, which offers 2-night sailings from the Port of Palm Beach to Freeport on Grand Bahama Island, announced in December 2021 that the cruise line was to be rebranded to Margaritaville at Sea. That rebranding is including a complete update to the line’s single cruise ship, transforming from 'Grand Classica' to 'Margaritaville Paradise'. The rebranding timeline, however, is a tight one indeed. The last sailing of the 'Grand Classica' is departing the Port of Palm Beach on April 16. The cruise will return and debark its last passengers on April 18. The initial April 30 debut meant the ship’s renovation and rebranding would take place in just 12 days, a very short period for such intensive work, even if most of the work may be decoration and styling details. With a further two weeks now available because of the inaugural sailing pushback, the cruise line can ensure more attention to detail and thorough completion of the work. This will permit more time to update the ship in order to truly deliver the quality of the Margaritaville experience to passengers once the ship sets sail. Report with photos: https://www.cruisehive.com/margaritaville-at-sea-delayed-two-weeks-cruises-canceled/69660

The hotel company Margaritaville Hotels + Resorts, named after the song “Margaritaville” by Jimmy Buffett, will enter the cruise business in spring 2022 with the former GRAND CLASSICA ex COSTA neoCLASSICA. The ship will be renamed to MARGARITAVILLE PARADISE and will get a striking, new hull artwork. Two-night cruises from Palm Beach will be offered from April 30, 2022 under the cruise brand Margaritaville at Sea. The cruise ship will be completely renovated beforehand. Bahamas Paradise Cruise Line will remain the owners of the cruise liner. Full article + image gallery: https://www.cruisedeck.de/aus-grand-classica-wird-margaritaville-paradise/