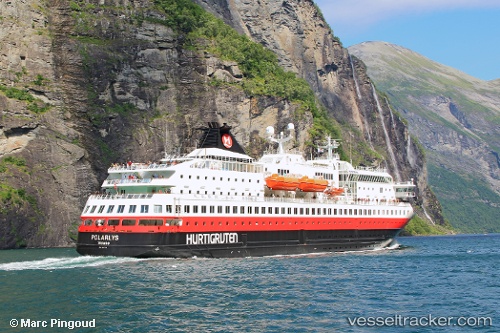 Norway-based expedition operator Hurtigruten plans to become the first cruise company in the world to power cruise ships using fossil-free liquified biogas (LBG) fuel from 2021. LBG can be produced using cutaways from fisheries and other organic waste, making it the most environmentally friendly fuel available today. The fuel is already being used for small applications in the transport sector, such as for operating buses, and Hurtigruten plans to use the steady volume of organic waste produced by Norway’s (and Northern Europe’s) large fishery and forestry sectors to run its vessels. “What others see as a problem, we see as a resource and a solution,” said Daniel Skjeldam, Hurtigruten CEO. “While competitors are running on cheap, polluting heavy fuel oil, our ships will literally be powered by nature. Biogas is the greenest fuel in shipping and will be a huge advantage for the environment. We would love other cruise companies to follow.”

Due to bad weather the "Polarlys" skipped its scheduled call to Kristiansund on Nov 15, 2013, at 4.30 p.m., and continued to Molde. Several other ships had sought refuge from the storm in the port at the same time.

On Apr 17, 2012, the "Polarlys" allided with the quay in Mehamn causing a million damage Only the small ferry "Lofoten" is able to berth at the quay, as the western part of the dock was totally destroyed. The accident happened when the ship was about to leave Hurtigruten ASA for security reasons decided that the vessels will berth at the industrial dock in the inner port now. The Gamvik Nordkyn Port Authority which owns the pier in Mehamn on Apr 20 received a preliminary damage report, which says that the western part of the pier is destroyed. They will consider facilitating concrete in connection with the repair instead of wood. Norwegian report with photos: http://www.finnmarken.no/lokale_nyheter/article6025000.ece