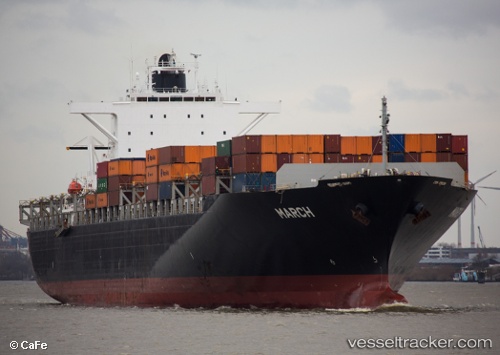 Athens-based shipping company Diana Containerships has reached an agreement to sell two of its 2004-built containerships for an aggregate price of USD 22 million. Under the deal, reached with an unaffiliated third party, Diana Containerships will sell the Post-Panamaxes m/v March and m/v Great. The ships are expected to be handed over to their new owner at the latest by March 30, 2018.

Diana Containerships has fixed its post-panamax boxship March (5,576 teu, built 2004) to SeaGo Line for seven to 12 months. The timecharter will commence at the end of June and was fixed at a gross daily rate of $6,075 per day, minus 5% commission. The rate will begin 10 days after the ship is delivered to the charterer, the NASDAQ-listed company said. Diana expects the contract to generate gross revenue of $1.22m during the first seven months. http://splash247.com/diana-containerships-fixes-post-panamax-to-seago-line/

Diana Containerships Inc., a global shipping company specializing in the ownership of containerships, today announced that, through a separate wholly-owned subsidiary, it took delivery of the m/v "YM MARCH", a 2004-built Post-Panamax container vessel of 5,576 TEU capacity that the Company entered into an agreement to purchase on August 7, 2014. As previously announced, the " YM MARCH " is chartered to Yang Ming (UK) Ltd., at a net charter rate of US$12,000 per day. Based on the existing time charterparty and its addendum, the charterer has the option to redeliver the vessel at any time between November 6, 2014 and April 6, 2015. Including the newly delivered " YM MARCH ", Diana Containerships Inc.'s fleet currently consists of 9 container vessels (3 Post-Panamax and 6 Panamax) as well as 1 Post-Panamax container vessel expected to be delivered to the Company by mid-October 2014. A