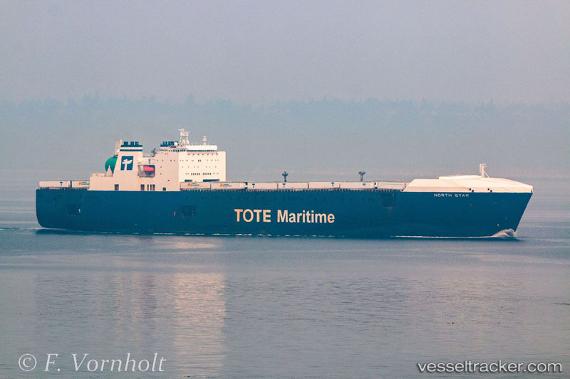 The 'North Star' assisted in a rescue operation of the US Coast Guard after a 42-foot fishing vessel ran aground near Cape Fairweather, approximately 10 miles north of Lituya Bay, on July 28, 2022. Watchstanders from Coast Guard Sector Juneau received a report at approximately 6:50 a.m. from the captain of the fishing vessel West Bank reporting that his vessel was aground and listing on a rocky beach. Watchstanders were able to maintain communications with the man through the 'Northstar', that stayed on scene to assist, until the helicopter crew arrived. A Coast Guard Air Station Sitka MH-60 Jayhawk helicopter crew arrived on scene and landed near the vessel at approximately 10:19 a.m., embarked the skipper and transported him to Air Station Sitka to awaiting EMS.

TOTE Maritime’s Alaska shipping division has completed the first of four conversion periods for its two Orca class vessels as part of the project to convert the diesel-powered ships to liquefied natural gas (LNG) fuel. TOTE Maritime’s North Star arrived in Anchorage on Sunday after completing her first voyage since the outfitting of two LNG fuel tanks at Seaspan’s Victoria Shipyard in British Columbia, Canada. In addition to the LNG tanks and accompanying infrastructure, the ship received critical engine updates necessary to utilize LNG as a fuel and underwent a standard regulatory dry-dock. The completion of “Phase 1” marked a key milestone in the four-year process to convert the two Orca class vessels to LNG fuel. The two vessels, ‘North Star’ and ‘Midnight Sun’, are both currently powered by four MAN 58/64 engines running on HFO. The conversion to LNG fuel will drastically reduce air emissions from the ships and will virtually eliminate sulfur oxides (SOx) and particulate matter while drastically reducing nitrogen oxides (NOx) and carbon dioxide. http://gcaptain.com/tote-maritime-completes-phase-1-of-orca-class-lng-conversions/

After a two-week delay, Tote Maritime Alaska’s cargo ship the North Star has finally set sail from Tacoma, bound for Anchorage. The company said in a press release on Friday that the ship successfully completed sea trials before departing at 7 a.m. Friday morning, and is scheduled to arrive in Anchorage on Monday. On Jan. 14, the ship was supposed to leave Tacoma, but a mechanical issue kept it docked there. Some grocery stores in Alaska ran low on certain items as a result. One of the ship’s transformers had to be replaced, said Grace Greene, vice president and general manager for Tote Maritime Alaska. She did not have more details about the mechanical problem. Tote originally thought the repairs would be finished earlier this week, and that she ship would sail on its scheduled Wednesday departure. The North Star is one of two Tote Maritime Alaska cargo ships that regularly transport groceries and other goods between Tacoma and Anchorage, the other being the Midnight Sun. https://www.adn.com/article/20160129/cargo-ship-sets-sail-alaska-after-delay