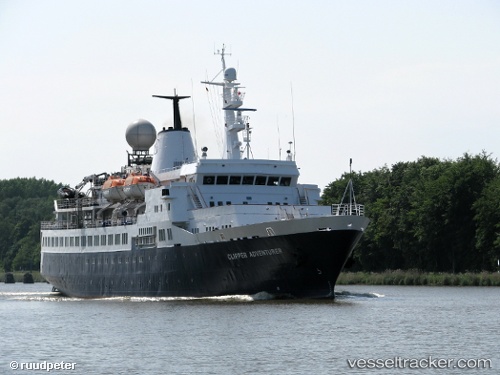 Owners to pay $500,000 in environmental costs after grounding

The "Sea Adventurer" has suffered engine trouble off Greenmland, and passengers have had their trip cut short. The cruise ship was heading to Greenland and then the Canadian Arctic when the problem occurred near Ilulissat on July 26, 2014.Repairs were expected to take about two weeks, and the company was now trying to find another vessel to take its place for the next voyage. The cruise passengers have been flown home.

The Canadian Coast Guard is seeking almost half a million dollars in damages caused by the cruise ship MV CLIPPER ADVENTURER and its owners. The coast guard, through the federal government, launched a lawsuit on Friday, June 15, 2012. The ship ran aground near Kugluktuk, Nunavut, in August 2010 after hitting an uncharted rock shelf. The Coast Guard's Amundsen ship had to rescue the 128 passengers after the Clipper Adventurer's crew was unable to dislodge the vessel. The lawsuit says the damages are to prevent, repair or minimize pollution from the ship's grounding. The Coast Guard said that when the ship was grounded, 13 tanks aboard were breached. Some of those tanks held fuel, freshwater and sludge. Source: CBC