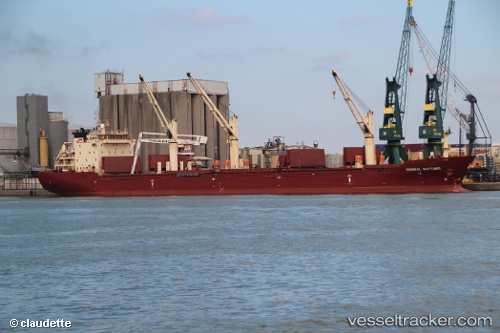 The 'Ocean Castle' allided with a pier at Oshawa harbour on the Lake Ontario on Sep 25, 2021, upon its arrival from Montreal with a cargo of steel. It hit the wall with its port side stern while manoevering to its berth. Both the ship’s stern and the pier were damaged. The pier was closed to the public. The ship berthed in Hamilton on Sep 28. Report with photo: https://www.thestar.com/local-oshawa/news/2021/09/27/ocean-going-vessel-loaded-with-steel-collides-with-oshawa-harbour-pier.html

The 'Ocean Castle' struck the lower ship arrester cable in the St. Lambert Lock off Saint-Lambert, Quebec in position 45 29 37.4N, 073 31 02.2W, on June 22, 2021, at 11.10 p.m. After the incident, the St. Lawrence Seaway was closed for approximately 12 hours while the ship arrester cable was repaired. There was no damage to the vessel and no pollution was reported. The ship left Montreal on June 24, headed to Torre Annunziata with an ETA as of July 9.