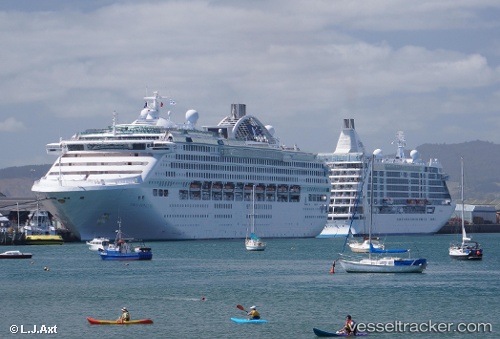 The first cruise ship to arrive in Australia since the COVID-19 pandemic took hold two years ago was the 'Pacific Expplorer,' which docked in Sydney in the morning of April 18, 2022, carrying only its crew. Tugs carrying water cannons showered the cruise liner as it sailed to the city's cruise terminal. It made the voyage from Cyprus where it has been anchored with many others after the local cruise industry was shut down due to COVID-19. Cruise ships have not been allowed to dock in Australia since the death of nearly 30 passengers who contracted COVID-19 while traveling aboard the cruise ship 'Ruby Princess' in March 2020. During that time, passengers of the vessel disembarked in Sydney, contributing to the spread of the virus in that community.The 'Pacific Explorer' will depart on its first trip with passengers on May 31, headed to Brisbane.

Members of the Philippine Coast Guard patrolled the Eva Macapagal Super Terminal as the 'Pacific Explorer' docked on April 29, 2020, to allow its Filipino crew members to disembark. They were allowed to disembark after a 14-day quarantine on the ship and another 14 days after they disembark. The Coastguard was monitoring seven cruise ships with Filipino crew members in Manila Bay. Report with photo: https://news.abs-cbn.com/news/multimedia/photo/04/29/20/filipino-crew-members-ready-to-disembark-from-ship

Passengers with Chinese passports forced to debark in Cairns

Passengers holding Chinese passports aboard the 'Pacific Explorer' were forced to debark the ship in Cairns on Jan 31, 2020, following Singapore’s decision to ban all travellers holding Chinese passports from entering the country. A total of 81 people were transported by buses waiting at Cairns cruise terminal to other accommodation. The ship departed Sydney on Jan 28 prior to the ban being introduced. The 'Pacific Explorer' was due to arrive in Singapore on Feb 11. To cause the least inconvenience for these guests, a decision was made for a compassionate disembark in Cairns on Feb 1. However, it was described by P&O as a “disappointing outcome” since all guests had satisfied P&O’s strict embarkation screening arrangements prior to boarding. But the Singapore measure had been introduced after the 'Pacific Explorer' departed Sydney on Jan 28 giving P&O little choice other than to assist guests affected by the Singapore decision in the most caring and dignified manner possible.