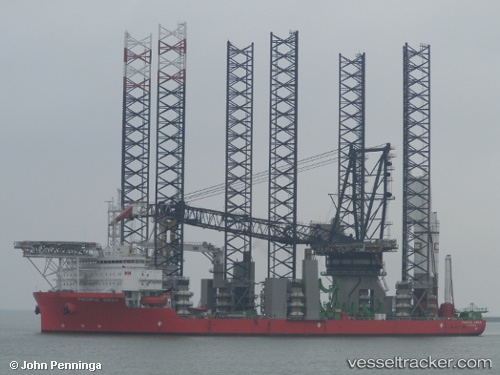 Coming from Eemshaven, the "Pacific Orca" was involved in a collision with the German trawler "Jurie van den Berg - NG 1" off the Dutch coast on Jan 17 at 2.15 a.m. The fishing vessel suffered substantial damage sustained on the starboard side, the mast and boom. The crew of six which was returning to Eemshaven from a fishing trip when the accident happened 14 miles north of the Wadden Islands. After the collision, both ships briefly stopped near each other. After it was determined that the "Jurie van den Berg" did not take on water it sailed to Eemshaven under its own power. The "Pacific Orca" which had been underway to the offshore Windpark Borkumriff 1 returned to port on Jan 17 at 4.20 p.m. bearing traces of the collision at the port side foreship with dents and scratches above the waterline. German and Dutch reports and photos: http://www.opurk.nl/nieuws/algemeen/24545-ng1-gehavend-na-zware-aanvaring http://forum-schiff.de/phpBB3/viewtopic.php?f=2&t=23#p99653 http://tinyurl.com/kggjqnk

The world’s largest offshore wind-turbine installation vessel, the Pacific Orca, on Oct. 28 has been formally christened in Copenhagen and is expected to strengthen Denmark’s offshore capacity. A total of 161 meters long, 49 meters wide and 10.4 meters high, the vessel is the biggest in its class till date. It can install offshore wind turbines to a depth of 60 meters, and thereby set up ultra-large wind farms with a capacity of up to 10 megawatts (MW). Designed to withstand harsh conditions, the vessel is equipped with six, 105-meter long “legs” and a high-speed jacking system that enables it to jack to a height of 17 meters above sea level in 60-meter deep waters. Its 1200-ton crane is capable of installing the 500-ton nacelles on top of turbine towers, some 120 meters above sea level, while its roomy cargo decks can hold up to 12, 3.6 MW turbines.

Swire Pacific Offshore, the parent company of Swire Blue Ocean A/S, has taken delivery of the world’s largest windfarm installation vessel from Samsung Heavy Industries. The vessel will be deployed to provide service for Danish DONG Energy. The vessel’s particulars include a length of 161 metres, a breadth of 49 metres and a depth of 10.4 metres. She will be the world’s largest structure for installing Wind Turbine Generators, with a capacity to carry and install up to 12 units of a 3.6 MW design. Pacific Orca can install offshore wind foundations and WTGs in ocean depths of up to 60 metres, and her special design will enable the installation of the ultra-large WTGs of 10 MW or more that are currently being developed to meet the future needs of the industry. By fixing her six jack-up legs to the seabed and lifting herself up to 17 metres above the surface of the ocean, Pacific Orca can conduct offshore windfarm installation in a manner least affected by wind and waves, and with maximum accuracy and promptness. http://www.maritimedanmark.dk/?Id=15149