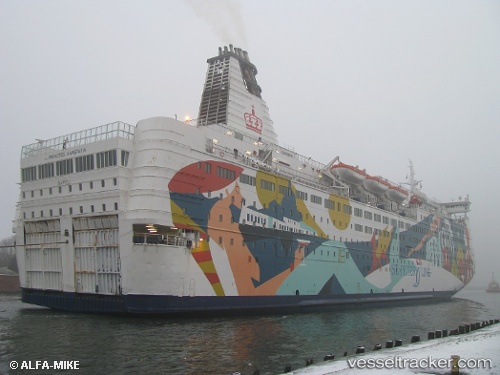 On MAy 3 the 'Princess Anastasia' has arrived at a new shipyard facility outside Murmansk in order to provide extra housing for local coronavirus response efforts,. About 2,000 workers out of 11,000 at Novatek's Belokamenka yard site have tested positive for COVID-19, and the number has been growing rapidly. The cruise ferry will provide berthing for staff who are believed to be healthy. Moby SPL had suspended the ship's normal sailing schedule due to coronavirus travel restrictions. The company has decided to temporarily use the ferry in another commercial project in Murmansk. One of the yard's primary contractors, Velesstroy, has partially suspended its work at Belokamenka due to the outbreak. Workers will carry out a 14-day self-isolation period, and after testing negative three times, they will be permitted to return home. The demobilization effort began on May 6 when 200 hourly workers left the construction site for flights back to their home regions. The new shipyard is intended to support the construction of Novatek's new Arctic LNG 2 liquefaction terminal near the Yamal Peninsula. The plan calls for three liquefaction plants built on top of giant gravity-based structures (GBS), similar in concept to the first North Sea offshore oil platforms deployed in the 1970s. The GBS jackets will be built and fully fitted out at Belokamenka, then floated to the Artic LNG 2 site and sunk in place. Commercial operation is scheduled for 2023. Novatek's previous LNG plant in the area, Yamal LNG, was built using Chinese- and European-assembled modules which were delivered to the site and connected together. By doing the assembly work at Belokamenka instead, Novatek will increase the amount of project capital expenditure that stays within Russia. Novatek has made clear that it will not slow down construction work for Arctic LNG 2 due to the coronavirus pandemic.The outbreak will not affect construction works on site, nor the successive development of the Arctic LNG-2.

A part of the workers of the construction site in the village of Belokamenka in the Murmansk region will be placed for quarantine on the “Princess Anastasia”. This was reported on May 1 by the Governor of the region, Andrey Chibis. The ship departed on April 27 from the port of Gdansk and arrived in Murmansk on May 2. This was another step to minimize the spread of the coronavirus on the project. The Belokamenka Center has become the largest outbreak of coronavirus in the region with 1079 confirmed cases of infection.

Ferry to become accomodation in Murmansk

The “Princess Anastasia” will likely become an accomodation for employees of contractors NOVATEK in Belokamenka. The ship was due to arrive in Murmansk on May 2, 2020, enroute from Gdansk, where it sailed on April 27. The ship may be used for the observation or isolation of employees with positive test, but without symptoms of the coronavirus. The operational headquarters in the Murmansk region reported that in evening of 28 April, the total number of patients with coronavirus in Belokamenka amounted to 922 people, the gain per day was 6.3%. In the village NOVATEK is building a shipyard for assembly lines for future LNG projects. On April 21 “Velesstroy” has declared a partial suspension of work. The company clarified that the measure was necessary for complete disinfection in the camp. Employees with negative test twice will be directed to a two-week withdrawal. Thee isolated will be accommodated in hotels, rest houses and boarding houses outside of the project and the Murmansk region. Most likely, the “Princess Anastasia” will be used for the quarantine of workers.