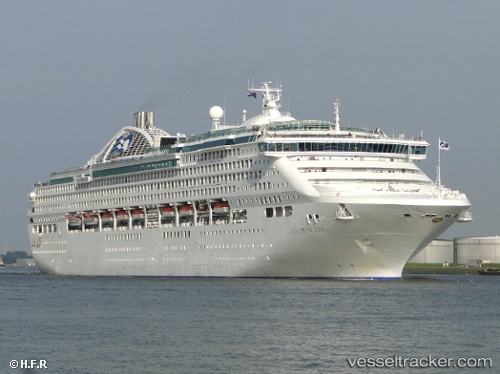 A Brisbane woman suffering a serious brain bleed was flown to a Queensland Hospital from the "Sea Princess" about 138 kilometres north-east of Hamilton Island on Feb 23, 2019. An RACQ CQ Rescue flew more than 1200 kilometres over 10 hours to winch the 71-year-old woman, who was unconscious, from the ship and transferred her to Townsville Hospital in a critical condition. The cruise shop was returning to Brisbane with 1998 passengers on board during the 14-day voyage when the woman became ill. Report with photo: https://www.brisbanetimes.com.au/national/queensland/unconscious-brisbane-woman-flown-to-hospital-from-cruise-ship-20190224-p50zwi.html

At least five cruise lines have altered itineraries in recent weeks as a result of the ongoing Kilauea volcano eruption on the Big Island. Sea Princess skipped a scheduled port of call to Hilo on May 18, while Royal Caribbean's Radiance of the Seas also canceled its visit to Hilo, in the immediate wake of the volcano's most recent activity.

'Cocaine babe' gets 8 years for smuggling via cruise ship

April 18 (UPI) -- A Canadian woman who helped smuggle $21 million worth of cocaine into Australia on a cruise ship -- and shared photos of her exotic travels online -- was sentenced to eight years in prison Wednesday. Melina Roberge was one of three Canadians who pleaded guilty to importing more than 200 pounds of cocaine on a luxury cruise liner in August 2016. Roberge said she'd been recruited by a "sugar daddy" for the plot, in which the 24-year-old stood to earn as much as $100,000. In June 2016, she was a last-minute replacement for the cruise on the MS Sea Princess. Prosecutors said Roberge and Isabelle Lagace were given first-class tickets on the vessel and spending money, and Roberge was told she would act as a decoy. She was encouraged to post photos on social media to show off the lavish trip. The Sea Princess stopped in Bermuda, Colombia, Panama, Ecuador, Peru, Chile and Tahiti before arriving in Sydney.