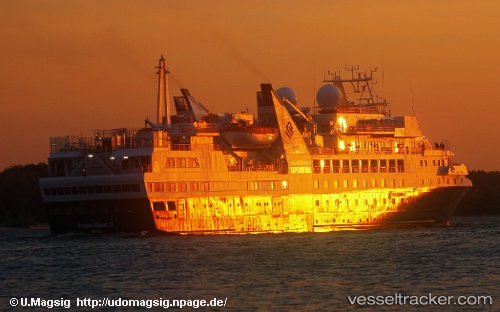 Staff of the Port Authority of Bahía Fildes carried out the coordination and support tasks for the medevac of a 71-year-old female passenger, a United States national, who suffered an accident aboard the “Silver Explorer” on Jan 22, 2022. The right leg was fractured while she was on ​​Greenwich Island. The disembarkation of the victim took place in Bahía Fildes, together with her spouse, supported by a rubber boat from the Port Authority of Bahía Fildes to the Antarctic Scientific Base "Bellingshausen" where her health condition was reassessed by a doctor from the Magallanes Clinic, supported by a Naval Nurse specialist from the Port Authority of Bahía Fildes. She was then transferred with an aircraft to the city of Punta Arenas. Report with photos: https://www.directemar.cl/directemar/noticias-y-comunicaciones/noticias/2022/armada-apoyo-evacuacion-medica-de-pasajera-accidentada-en-crucero

The Philippine crew member of the 'Silver Explorer' who disembarked in the bay of Valparaíso for being in a serious state of health, remained serious and stable in a clinic in the region. The 'Silver Explorer' contributed 21 cases of Covid-19 to the Los Lagos Region and was the first cruise ship to give a positive case of coronavirus on this type of vessel in Chile. After spending about two weeks in the Los Lagos Region, the ship arrived in Valparaíso bay on March 31, where it landed two Chilean passengers under the highest security protocols. In the regional capital, the ship also stocked up on groceries, supplies, medicines and oil.

A 85-year-old man had viral symptoms when he boarded the "Silver Explorer" in the city of Caleta Tortel, located over 2,000 kilometers from the capital Santiago, on March 14, 2020. The man was then transferred to a hospital where he was tested positive for the croona virus. The ship was quarantined off the port of Castro. The British citizen was in good condition. 99 passengers were evacuated to their respective countries in the night of March 17 and transferred directly to El Tepual airport, in the capital of the Los Lagos region, where they boarded three charter flights to the United Kingdom, Australia and the United States. This process was carried out without problems in collaboration with Onemi, Carabineros, the Air Force and health personnel from the area. Meanwhile, five foreign citizens, who were in isolation due to Coronavirus at the Puerto Montt hospital, were discharged on March 15 for which reason they were now carrying out the proper quarantine in designated places.